Michael Lister Robinson was born in Chelsea, London on 8 May 1917. He was the son of Roy Lister Robinson, 1st (and last) Baron Robinson and Charlotte Marion Cust Bradshaw. He was educated at Downside School, Bath, Somerset, England.
He joined the RAF on a short service commission in September 1935. On the 28th he was posted to 3 FTS, Grantham and, with training completed, he joined No. 111 Squadron at Northolt on August 3rd 1936. Robinson went to No. 11 Group Pool, St Athan on January 30th 1939, as an instructor and was appointed 'B' Flight Commander on July 10th. Six months or so before the outbreak of war, he and two young Army friends, were on leave, skiing at Garmisch. One evening in the local pub they encountered a group of Luftwaffe officers, also on leave, from the Richthofen Geschwader, based at Augsburg in southern Germany. A senior German officer had invited the lot to a guest night in the mess at Augsburg. The invitation was accepted. After a taxi drive they reached the Richthofen Geschwader's Mess. On that evening they dined together and after a lot of beer and kirsch, a young Leutnant came up to Robinson and asked 'You've got Hurricanes? Michael replied: 'Yes,' 'Well,' he said, 'we've got Messerschmitt 109s and God help you if you ever have to fight us in your old tubs.' It was their Mess so Robinson didn't want to provoke an argument. 'You know,' he said, 'even so, we still think our Hurricanes are pretty good, too.'
'Then,' the German replied, You don't believe me? When the war starts (and I hope it does soon) I will take on any three Englishmen with Hurricanes in my Messerschmitt.' A few days later, Robinson went home.
He was posted to France on March 16th 1940 and joined No. 87 Squadron there. On May 9th he badly injured a hand in a crash in a Master and was sent back to England.
Fit again, Robinson was posted to No. 601 Squadron at Tangmere on August 16th as a Flight Commander. During that day, at the end of a combat mission, he encountered a Me109 which he forced to land. Robinson landed nearby and walked across two fields to where the German pilot was lying in the sunshine. Hello, he said to the pilot, are you all right? He nodded. Then, Michael asked, may I have your pistol? As he handed it over to him, Robinson said to him: Your face seems familiar, haven't we met somewhere before? Yes, he said, wherever was it? Augsburg, February 1939, Michael said. It was a good dinner. It was the young Leutnant. Ah, yes, the German murmured. But tell me - why didn't you shoot me down when I was in the air? I couldn't have escaped. 'Michael responded: As a matter of fact, I couldn't shoot you down, I had to force you down the way I did. I had used up all my ammunition on some other 109's. Then the Home Guard came and took him away.
Robinson went to No. 238 Squadron at Chilbolton on September 28th and was posted to command No. 609 Squadron at Middle Wallop on October 4th.
He was posted away to lead the Biggin Hill Wing in early August 1941. On August 19 Ortmans of 609 went down into the sea during a Blenheim escort operation. Robinson circled him until his fuel ran very low, by which time an ASR launch was well on the way. He just managed to make it back to Manston, where he made a crash-landing.
On August 27th Robinson destroyed a Me109, his final victory. In September 1941 Robinson was rested and commanded RAF Manston until October, when he was appointed as aide to the Inspector General of the RAF.
Back on operations, Robinson was appointed to lead the Tangmere Wing on January 1st 1942. He failed to return from a sweep on April 10th whilst leading the Wing at the head of 340 Squadron and he and his aircraft were not seen again. He was at that time 25 years old, having destroyed a total of 16 enemy aircraft, 4 probable, 1 shared probable, 8 damaged and 1 shared damaged.
Robinson is remembered on the Runnymede Memorial.

Citation:
"Squadron Leader Robinson has shown conspicuous gallantry and leadership in his attacks against the enemy. On two days, in combat with large enemy forces, he destroyed two of their aircraft on each occasion, bringing his total victories to at least six."

Citation:
"This officer has commanded the squadron since October, 1940. He has acted as leader in recent offensive operations over occupied territory and, on numerous occasions, has led his wing with determination, skill and courage. The successes obtained reflect the greatest credit on the leadership and devotion to duty of this officer. He has destroyed at least fourteen enemy aircraft and damaged others." 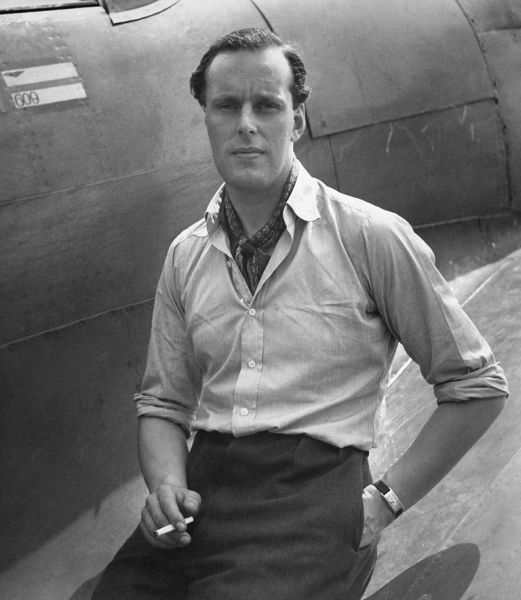