Harry George De Wolf entered the Canadian Navy during WWI when he was just 15. After studying at naval colleges in both Canada and Britain he began his march up through the ranks.
When WW2 broke out DeWolf was named commanding officer of HMCS St. Laurent. The destroyer was on convoy duty when it was ordered to England to help evacuate British and French troops from France. In August 1943 De Wolf was named commanding officer of the newly commissioned destroyer HMCS Haida,
One of the most courageous but painful chapters in his career came in 1944 when HMCS Athabaskan, Haidas sister ship, was torpedoed in the English Channel with the loss of 128 sailors. Under De Wolf's command, the Haida simultaneously fought two German destroyers before returning to rescue 42 Athabaskan survivors. The Haida spent more than 20 perilous minutes before De Wolf decided it was time to leave the dangerous waters in order to guarantee the safety of his own crew.
Under his command, Haida was responsible for sinking or damaging 14 German ships in the English Channel during 1944.
After the war De Wolf remained in the navy and before he retired in July 1960 he had been appointed Chief of Naval Staff, with the rank of Vice Admiral.

For outstanding zeal, patience and cheerfulness and for never failing to set an example of wholehearted devotion to duty without which the high tradition of the Royal Canadian Navy could not have been upheld.

For valuable services in command of HMC Destroyer (HMCS St. Laurent) in the early months of war in Convoy Escort duty in the Western Atlantic, and overseas during the evacuation from France.

For outstanding courage, skill and devotion to duty in H.M. Canadian Ship Haida in action with German destroyers.

The HMCS Haida sunk the German Destroyer T-29 north of Britany on 26 April 1944.

For outstanding courage, skill and devotion to duty in H.M. Canadian Ship Haida with German destroyers.

For bravery, skill and devotion to duty in H.M. Canadian Ship Haida in anti U-Boat operations.

For courage and determination in H.M. Ships Haida in a series of successful attacks on enemy escorted convoys off the coast of France.

Commodore De Wolf has held various administrative appointments, including that of Director of Plans, at Naval Service Headquarters at a time of rapid expansion in the R.C.N. As Commanding Officer of one of HM Canadian Tribal Class Destroyers (HMCS Haida), he served at sea with unparalleled success during the invasion of the Continent. On being re-appointed ashore, he now holds the position of Assistant Chief of Naval Staff, which appointment is being filled with perspicacity and ability.

For services at sea in the war against the enemy.

For services at sea in the war against the enemy.

With Oak Leaf for Mention in Dispatches (4).

This award was obtained in the form of an Bar to be attached on the ribbon of the Atlantic Star.

With Bar for overseas service. 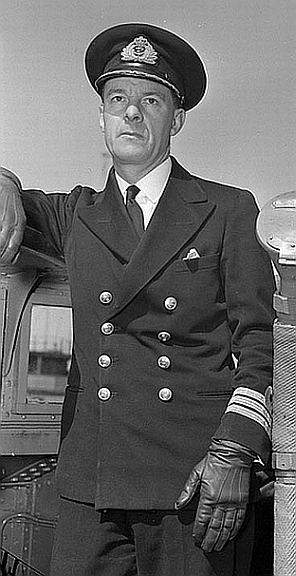