Eric Garland joined the Royal Army in September 1939 and initially served in the Artists Rifles. He was commissioned Second Lieutenant, 6th Battalion York and Lancaster Regiment and served with the regiment as part of the 138th Infantry Brigade, 46th Infantry Division, B.E.F. in France, and was present during the retreat to Dunkirk. Garland distinguished himself at Wormhoudt, on the Dunkirk to Cassel road and at Watou where he rescued three men from a burning ammunition store (not a burning house, as listed in M.C. citation).He and was one of the last to be evacuated on the Medway Queen to reach Ramsgate.
Shortly after returning from Dunkirk, Garland volunteered for service with the newly formed No. 11 (Scottish) Commando. After undergoing rigorous training in the wilds of Scotland he was attached to 'C' Battalion, 'Layforce' (11th Scottish Commando); who was the first to cross the Litani River, where he diliberately drew fire from a sniper to locate it and killed him with his brengun.
Having joined the Royal Air Force as a Pilot, his Spitfire was shot down over the Cassino battle area on June 4th,1944. Subsequently Garland was taken POW and despite suffering burns to his hand and a wound to his leg, he escaped from a hospital train bound for Germany. Evading recapture he joined the partizans and fought with them at Vasto di Sotto, Before Returning to Allied Lines in January 1945
After the War he joined British European Airways (BEA) as a commercial pilot, and moved to Kenya in 1948. Garland was based here at the start of the Mau Mau Rebellion and immediately joined the Air Wing of the Police Force; he flew Rapide, Messenger and Bonanza aircraft. He later became a pilot for Manx Airlines, before retiring in 1985, at the age of 65.

Besides the medals mentioned below he was also awarded:
- 16 december 1947: Efficiency Medal (Territorial)
- Africa General Service 1902-56, E.II.R., one clasp, Kenya

Recommendation:
"At Watou on May 28 1940 during a very intense bombing raid showed conspicuous bravery by entering a bombed and burning house while the raid was at its height and carried out 4750206 Private Nicholson to a place of safety. He at once returned and rescued two military policemen who had been wounded, and bound up their wounds. Private Nicholson died shortly afterwards. Heavy bombing was taking place while Second Lieutenant Garland was engaged in this rescue work.
The previous day this same officer carried out a reconnaissance under machine gun fire on a motor cycle at Wormhoudt and was able to guide his unit transport on a safe route."

Recommendation by Colonel Laycock:
"Litani River (Syria) 9-10 June 1941. Lieutenant Garland displayed throughout the action cool and clear-headed leadership and complete disregard for his own personal safety. He was the first individual to cross the river and personally led the party which cut out the enemy wire on the far side under heavy fire. On one occasion by deliberately exposing himself he personally drew the fire of a sniper who was causing severe casualties and, on locating the enemy position, Lieutenant Garland manned one of his Bren Guns and shot the sniper. Lieutenant Garland also put out of action a 75 Gun, which was covering the river, by accurate fire from a captured anti Tank Gun."
Second MC awarded as a MC for on the ribbon of the first MC.
Originally recommended for a DSO.

Citation:
"Flight Lieutenant Garland's aircraft was shot down over Frosinone in Italy on 4th May, 1944. He was immediately captured and sent to a hospital at Acre. In spite of his wounds, this officer made three attempts to escape from a hospital at Mantova in May, 1944. He collected a store of medical materials and retrieved his battledress. Twice he was caught by sentries while climbing through a window. The third time, after sliding down a laundry chute, he was captured while trying to saw through a door. In June, 1944, Flight Lieutenant Garland jumped from a hospital train near Verona. After two days he made contact with some friendly Italians, with whom he stayed for two months. In August, 1944, he set out with the intention of joining some Italian partizans. He walked for three days, but owing to a leg injury he was forced to take refuge with another Italian family. In January, 1945, Flight Lieutenant Garland left these people, his leg having finally healed, and reached the American lines at Solarolo in the Po Valley." 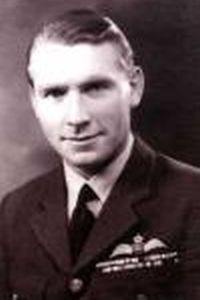