Wim Ligthelm and his brother Jan grew up in Voorburg, Holland near The Hague. Their parents, Johannes Pieter Franciscus Ligthelm en Dorothea Sieglinde Gertrude Waldmann lived in Park Vronesteyn. Their father was Dutch, their mother was of German-Polish origin so the brothers spoke German rather well. Before the war, Jan had completed his compulsory military service in the army and he had served on the Peel-Raam position. Wim was only 17 yearrs old when the war broke out.
Wim and Jan soon went into hiding, initially in Rotterdam where they were given forged identity papers and then for a few weeks in a farmhouse in Drenthe. After 10 weeks, they were back in Rotterdam where they became involved in the resistance. Wim was only 17 and became a courier, Jan became a commander in Voorburg. From the spring of 1940 they were involved in an escape route for downed R.A.F. pilots. In 1941 there were warned through their niece Charlotte Ligthelm-Jonkers the group had probably been betrayed.
To England>

Wim and Johannes intended to go to England by boat but when they found out they were wanted they decided to escape via the southern route. Later, their parents sold their boat to Jaap Burger. They left in September 1941; they fled via the Hofpleinline to Overschie in the first night where they went into hiding at Eijk Speelmans place, a grain merchant and friend of the familiy. The next part of the trip was by train. They spent the night with the Van Niftrik family, hiding in the basement of their factory. The next day they went to Antwerp and then to Brussels where they were given new identity papers, showing they were students in Belgium. His name was now Wim van Veen, the name of a boy who had died at the Grebbeberg but who was never removed from the ledger. Suddenly they were ordered to return to Antwerp. There they were allocated a couple to take with them to Switzerland. He was a Dutch cadet, later his wife turned out to be the daughter of General van Oijen; she had to be taken to safety as it was feared she might be kidnapped in case Japan would invade the Dutch East-Indies: her father being commander of the Military Aviation branch of the KNIL, the Royal Dutch East indies Army.
From Antwerp, they made an exiting trip through southern France to Spain. In the Pyrenees, Wim fractured his ankle so they reported to the Spanish police in Figueras. After a delay of some 3 months in Madrid they could travel on to Portugal. They flew to Bristol on a KLM plane.
So, the 4 of them travelled to Switzerland. They crossed the Swiss border through the snow at Pontarlier. The brothers were taken to a camp in Ascona where they were free to move during the day. They even took a day trip to Italy twice. There was a Polish military camp across from their camp on the other bank of the river. One day, Wim Ligthelm came to talk with a Polish captain he was to meet again later.
In Switzerland, Jan contracted pneumonia and was admitted to hospital. Wim waited until he had recuperated and subsequently they continued on their journey to Spain. With the aid of a police official in Geneva they crossed into Vichy-France. A priest in Annecy was an important link in the escape route. They crossed the Pyrenees near Andorra, there was 10 degrees of frost but no snow. During their trek through the mountains, they lost their guide and Wim fractured his ankle near a ravine, it would turn out later he also had broken two toes preventing him from particpitaing in sports for the rest of his life. While they were waiting in a farm house to spend the night, two men in civilian clothes came in. The 4 man looked distrustfully at each other until the Polish captain and Wim Ligthelm recognized each other. Great relief. His ankle was bandaged but when they arrived in Spain the next day, Wim was unable to walk on. They were arrested but 5 days later they were released again after intervention by the wife of the Dutch ambassador in Spain.
In Madrid, they were staying in Hotel Mona where other Dutchmen sat waiting for visa and transport to Portugal. This was mainly delayed by General Von Moltke but when he died in 1942 from an appendix operation, it did not take long before they could travel on. They were flown to Bristol by KLM on May 5, 1943. There they met a boy who introduced himself as Tony Stroever. He turned out to be the brother of the KLM captain and he was overjoyed to learn his brother was still alive.
Both brothers entered service in the British air force. There was a Dutch Division within the R.A.F. Both brothers went to Canada first to be trained as fighter pilots. When the Canadians discovered Johannes was well over 8 years older than Willem, they appointed him an instructor; Willem became a fighter pilot.
After the war
At the end of the war, Wim Ligthelm took additional training to become a pilot with KLM but when he returned to the Netherlands in January 1946, he was posted to the KNIL and sent to the Dutch East Indies, remaining there until 1948. Subsequently he found employment at Ypenburg air base as a captain with a charter company Aero Holland that went out of business in 1952. Meanwhile he had decided not to make the transfer to KLM and went to work in the business of his father. He quit flying altogether after 1952.
During the war he had married an Anglo-Irish teacher in England he had met in 1943, Alice Marquerite Hickey, B.A. She passed away in 1992. They had three children, 2 boys, a twin and a daughter. He passed away in his place of birth Voorburg on May 22, 2014 at advanced age. He was buried with military honors on May 30, 2014.
Text taken from Wikisage (written by Pauline van Till). 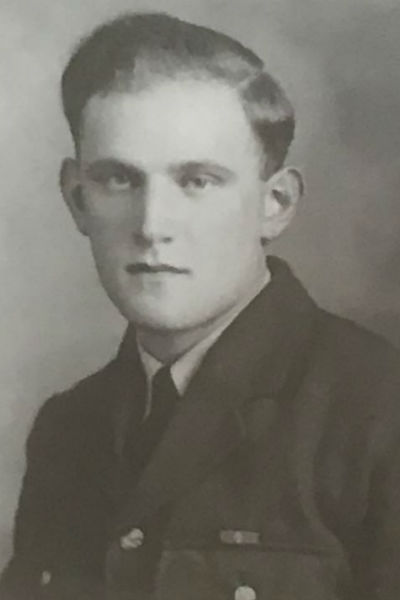