"For conspicuous gallantry and intrepidity at risk of life above and beyond the call of duty in action with the enemy near Altavilla, Italy, 13 September 1943. When Company I attacked an enemy-held position on Hill 424, the 3d Platoon, in which Pvt. Crawford was a squad scout, attacked as base platoon for the company. After reaching the crest of the hill, the platoon was pinned down by intense enemy machinegun and small-arms fire. Locating 1 of these guns, which was dug in on a terrace on his immediate front, Pvt. Crawford, without orders and on his own initiative, moved over the hill under enemy fire to a point within a few yards of the gun emplacement and single-handedly destroyed the machinegun and killed 3 of the crew with a hand grenade, thus enabling his platoon to continue its advance. When the platoon, after reaching the crest, was once more delayed by enemy fire, Pvt. Crawford again, in the face of intense fire, advanced directly to the front midway between 2 hostile machinegun nests located on a higher terrace and emplaced in a small ravine. Moving first to the left, with a hand grenade he destroyed 1 gun emplacement and killed the crew; he then worked his way, under continuous fire, to the other and with 1 grenade and the use of his rifle, killed 1 enemy and forced the remainder to flee. Seizing the enemy machinegun, he fired on the withdrawing Germans and facilitated his company's advance." 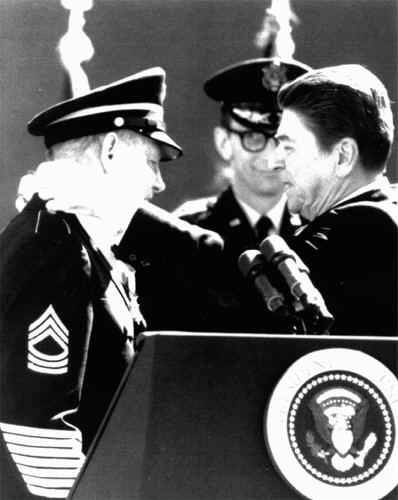