"He was the radio operator of a B-29 airplane leading a group formation to attack Koriyama, Japan. He was charged with the additional duty of dropping phosphoresce smoke bombs to aid in assembling the group when the launching point was reached. Upon entering the assembly area, aircraft fire and enemy fighter opposition was encountered. Among the phosphoresce bombs launched by S/Sgt. Erwin, 1 proved faulty, exploding in the launching chute, and shot back into the interior of the aircraft, striking him in the face. The burning phosphoresce obliterated his nose and completely blinded him. Smoke filled the plane, obscuring the vision of the pilot. S/Sgt. Erwin realized that the aircraft and crew would be lost if the burning bomb remained in the plane. Without regard for his own safety, he picked it up and feeling his way, instinctively, crawled around the gun turret and headed for the copilot's window. He found the navigator's table obstructing his passage. Grasping the burning bomb between his forearm and body, he unleashed the spring lock and raised the table. Struggling through the narrow passage he stumbled forward into the smoke-filled pilot's compartment. Groping with his burning hands, he located the window and threw the bomb out. Completely aflame, he fell back upon the floor. The smoke cleared, the pilot, at 300 feet, pulled the plane out of its dive. S/Sgt. Erwin's gallantry and heroism above and beyond the call of duty saved the lives of his comrades." 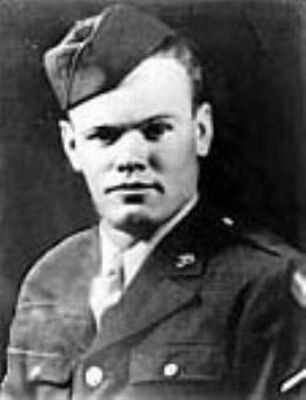