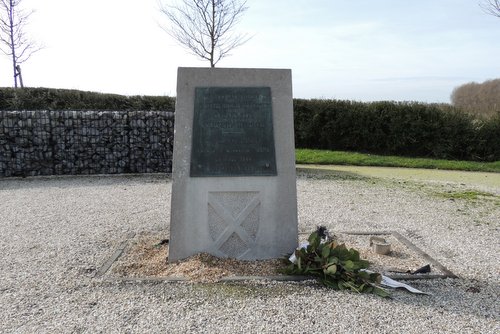 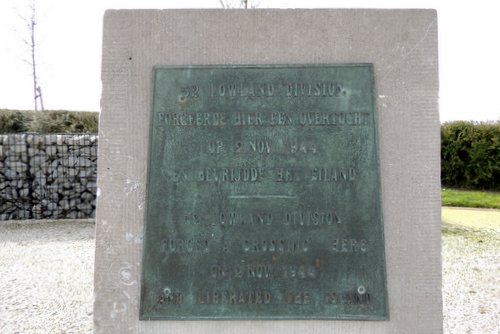 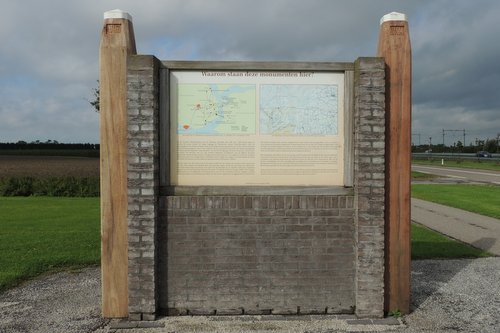 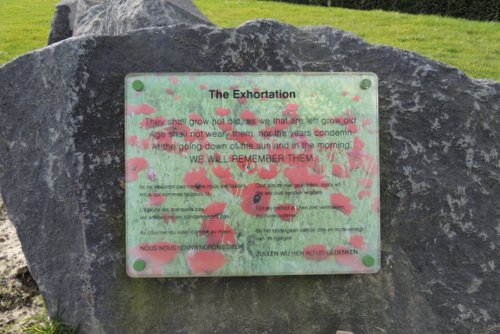 On the Post Road which runs along the A58 to the Mallardviaduct, found in the town Arnemuiden this Memorial Place with five monuments.
The name of the newly constructed bridge, the 'Mallardviaduct" the English word for ' wild duck', near the memorial recalls the accompanying operation of the Sloedam Causeway and Walcheren during World War II, the Causeway was captured on the Germans.During the liberation of Zeeland, at the Causeway a fierce battle was fought with many casualties.

Text on the monument:
52 Lowland division
Forced A Crossing Here
On 2 Nov. 1944
And Liberated the Island

At the entrance to the monuments is an information board on both sides and explanations in Dutch and English.
"The battle of the Causeway and Operation Mallard from October 31 to November 5, 1944.
In the second world war the Causeway (then a dam of only 1000 meters long and 45 meters wide) was the only entrance to Walcheren from South Beveland.By the presence of French troops, after the Dutch surrender on May 14, 1940 in Zeeland the struggle still continues. On May 17, 1940 at 09:20 hrs, the 9th company / SS Regiment "Deutschland" of SS-Division Verfugungs attacked from South Beveland. The French 224th Regiment d'Infanterie of the 68th Infantry Division offered fierce resistance and beat several attacks.
At about 17:00 hours, the Frenchmen retreat. That same night, Walcheren and South Beveland surrendered. The French counted nineteen dead, the Germans fifteen.
At the end of the war, the Causeway was again the scene of heavy battle.From late October 1944 on, the Allies were up against the German occupation of Walcheren. That battle began with an attack on land through the Causeway on October 31, 1944 by Canadian troops of the 2nd Canadian Infantry Division, the Black Watch of Canada (RHR), the Calgary Highlanders and Le Regiment de Maisonneuve of the 5th Canadian Infantry Brigade claimed successively four frontal attacks.
The first beachhead in Walcheren could only be detained for several hours. They had to pull back. On November 2, the attack (Operation Magnetise) taken over by the 1st Bn the Glasgow Highlanders of the 52nd (Lowland) Infantry Division.
In the afternoon of November 3 the Causeway could be taken permanently. During the battle of the Causeway, lasting from October 31 to November 5, 1944, 45 Canadians and 19 British were killed.
An important part of the conquest of the Causeway was the flanking operation Mallard. From the harbor South Kraayert in Nieuwdorp was the Sloe in the night from February to November 3, a landing was performed on Walcheren by the 6th Bn the Cameronians (SR) to attack the German defense using a flanking movement to the Causeway. The operation was a success. Eastern Walcheren was liberated on November 5, 1944. During Operation Mallard, nineteen British soldiers lost their lives. During the battle of the Causeway there were fierce battles.

The sites listed here are a tribute to the brave Allied soldiers who gave their lives for our freedom here and around the Causeway in the battle at Sloe.