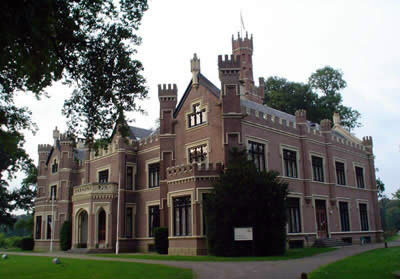 Castle 'De Schaffelaar' and labour camp 'De Biezen' served in the Second World War to around seven hundred privileged Jews, not so much concerned with Nazism as the Mussert-Jews from Doetinchem but privileged, by example some fought in the First World War for Germany, to protect against deportation to a concentration camp like Auschwitz or Sobibor.

With the help of their privileged position survived the vast majority of the group Barneveld the war (those who did not survive the war, died all a natural death).

At this moment there is in Barneveld, next to castle 'De Schaffelaar, a memorial for the residents of this castle and Huize De Biezen (which was designed by one of the former residents).