Leo Major was born on January 23, 1921 in the town of New Bedford in Massachusetts, United States of America. Even though he was born in the US, Leo had two French-Canadians parents, Achille Major and Amanda Sévigny. Indeed, his father was working for the Canadian National, a railway company, and was on temporary deployment in the United States. In September 1921, the Major family went back to Montreal in Quebec, where Leo would spend his childhood. Leo had twelve siblings in all and would mostly be raised by his mother since his father was away for work most of the time. However, when Achille came home, Leo would experience his anger and rage as his father beat him for his bad conduct while he was away. His father, catholic at the time, converted to Protestancy and sent Leo off to an English school. 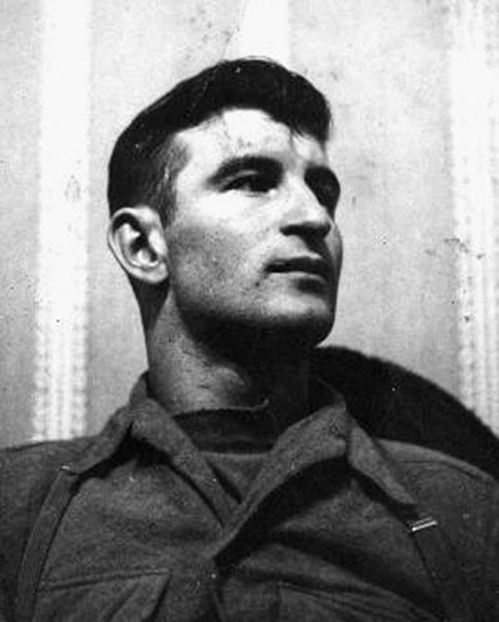 At the age of fourteen, Leo quit his family home and went to live with his aunt and uncle to end his relationship with his father. Three years later, Leo wouldl start working as a construction worker at the Montreal central train station. His boss quickly appreciated Leos work and vigor. Indeed, the teenager was brave and didnt fear dangerous jobs and tasks. Leo would change jobs many times until his engagement.

On September 10, 1939, Canada declared war on Germany and joined the United Kingdom and France in the conflict. About a year later, in June 1940, Leos taste for risk and danger made him join the Canadian Army. He was nineteen years of age at the time and despite his small stature (5 foot 9 and 134 lbs), he already showed his courage and braveness by saving many people from the tumultuous waters of the St-Laurent River and by practicing boxing regularly.

Leo joined the Regiment de la Chaudiëre, a French-Canadian regiment, and headed to the military base of Valcartier, near Quebec City, to follow his training. Unfortunately, he contracted pneumonia that send him to the hospital for 49 days to 'admire the beautiful nurses legs" he said in his biography. Leo was to stay at Valcartier until September 22 1940, when his regiment was transferred to Sussex, New-Brunswick, to pursue his military training. A year later, in July 1941, the Regiment embarked on the SS Strathmore, a Canadian cargo ship from the Oriental Steam Navigation Company, and headed to join the rest of the regiment in Scotland.

The regiment and Leo would be pinned down in Scotland for about three years, continuing training while waiting for a mission. During this time, the young adult would train and specialize in marksmanship and reconnaissance. His knowledge of English made him the perfect candidate to be in charge of the communications throughout the regiment. He would be offered a promotion to Sergeant, but declined the offer saying that 'the sergeant does the officers work but without merit'. During his time in Scotland, Leo would befriend another soldier named Wilfrid Arsenault, a French-Canadian from Montréal.

A Hero is born

On June 6th, the landing in Normandy began for the allied troops. Leo, as a scout, and the Chaudières landed on Juno Beach with the rest of the Canadian troops. A regiment of English Canadians, the Queen's Own Rifles of Canada Regiment, were stuck on the beach. Leo, with other soldiers, were able to blow up a German bunker with a Bangalore torpedo and were able to make a dozen prisoners. Later in his life, Leos son asked him if he was scared and he responded 'No, i was too busy shooting at the Germans'.

Later that day, Leo and another scout were sent on a scouting mission. They quickly saw a German half-track occupied by three soldiers. Leo and his comrade attacked the truck, wounding the driver and killing another soldier. The captured half-track contained many secret codes and communications used by the German. Afterwards, Leo was sent on another reconnaissance mission that day and was caught in a fight with a German patrol. During the fight, a grenade damaged his left eye but he convinced his officers to let him stay and would put on an eye patch.

However, the major heroic actions of Leo unfolded during the liberation of the Netherlands, the First Canadian Army would be sent to. In the battle of the Scheldt, during autumn 1944, Leo made 93 prisoners of war himself. Unfortunately, some months later, in February during the battle of the Rhine, Leo was in a vehicle that struck a mine. The explosion ejected him from the vehicle, breaking his two ankles and injuring him in the back. He was sent to an allied hospital nearby for treatment. Like the other injured, Leo was supposed to be evacuated back to Canada but refused and rejoined the Chaudière Regiment after he had recovered.

The liberation of Zwolle

His most spectacular act was during the liberation of Zwolle, an important city in the Netherlands counting 50 000 citizens, on April 13, 1945. Before attacking the town, the Canadian headquarters wanted to have an idea of the occupation forces present in the city and its surrounding. Leo and his best friend Wilfrid volunteered for this dangerous scouting mission. The two soldiers left camp at about 21:30 and headed for Zwolle. While going through town, they walked right in front of a German outpost, killed the occupants and hid, waiting for reinforcements that would never come. At about 23:00 hrs, Leo Major and Wilfrid Arsenault left their hiding spot and crossed the train track. Unfortunately, a German patrol discovered them and a shooting started between the two parties. They tried to evade the patrol but Wilfrid was shot and died on the spot. Leo, now safe from the patrol, decided to continue his mission and to avenge his friend. Armed with two Sten guns and multiple grenades, Leo headed downtown at about 1:00 hrs. 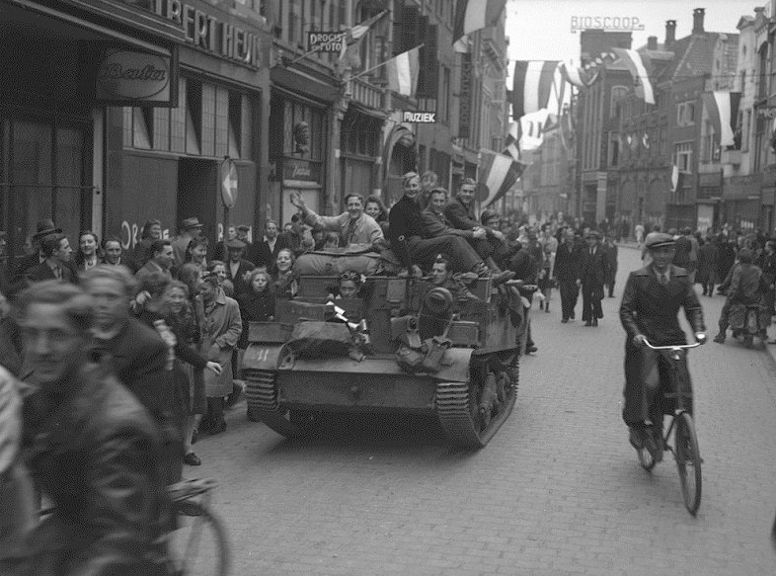 Entering the town, he captured a German officer and told him that Canadian troops had encircled the city. The officer was then set free in the hope that he would convince the other Germans to leave the city. During the night, Leo ran around town firing shots and grenades, setting many buildings and vehicles on fire and even breaking into the Gestapo office, killing four of the eight generals. Scared and thinking a whole commando battalion was in town, the whole German regiment stationed in Zwolle left the city in panic.

When the sun rose in the morning, Leo made contact with local resistance members to tell them the city was now liberated from the German army. Carrying Wilfrids corpse, Leo went back to camp and announced the news to the rest of the astonished Chaudière Regiment.

For his exploits, Leo Major would receive the Distinguished Conduct Medal, the highest honor medal in Canada at the time. However, his military career wasnt over yet. He continued to fight during the Second World War. In 1950, the Korean war broke out and Canada, being a member of the U.N.O, sent troops to fight the communist and Chinese troops. Promoted to the rank of corporal, Leo was to be in command of a scout unit, the 22 Regiment also known as the "Van Doos". During his time there, Leo distinguished himself again in the battle for Hill 355 and would earn another Distinguished Conduct Medal; in two different wars, a unique feat in Canadian history and the third one in the history of the British Commonwealth.

Leo retired after the Korean war and traveled to the Netherlands and Zwolle many times. In 2005, he was named honorary citizen of Zwolle and a street was named after him, "Leo Majorlaan". 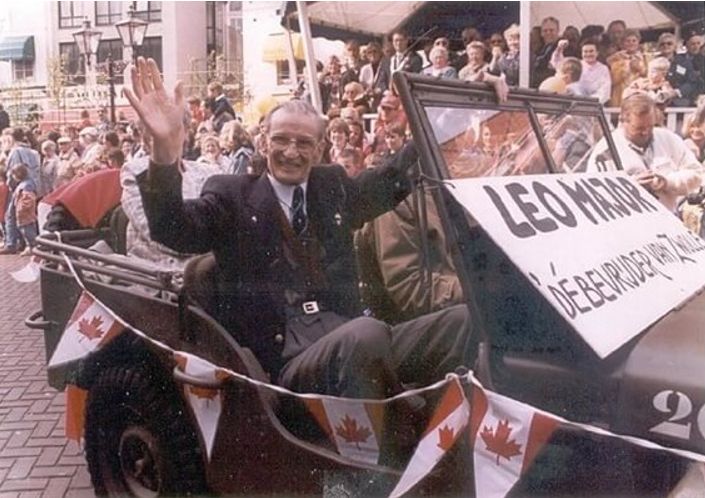 Leo back in Zwolle in 2005. Source: Dutch Letters

On October 12, 2008, Leo died from bone cancer in Longueil, Quebec. Many documentaries and biographies were written and produced after his death and on May 8, 2020, Canada Post would make a Leo Major Memorial stamp to celebrate the 75th anniversary of the victory of World War II in Europe. Leo, for his courage, gentlemanliness and braveness, will live forever as one of the greatest Canadian heroes.

Commonwealth
Intergovernmental organisation of independent states in the former British Empire. A bomber crew could include an English pilot, a Welsh navigator, air gunners from Australia or New Zealand. There were also non-commonwealth Poles and Czechs in Bomber Command.
front
Largest Soviet ground formation. It was attached to a certain area which gave its name to the units involved. For instance the Voronezh front.
Gestapo
Geheime Staatspolizei. Secret state police, the secret police in the Third Reich.
mine
An object filled with explosives, equipped with detonator which is activated by either remote control or by colliding with the targeted object. Mines are intended to destroy of damage vehicles, aircrafts or vessels, or to injure, kill or otherwise putting staff out of action. It is also possible to deny enemy access of a specific area by laying mines.
Regiment
Part of a division. A division divided into a number of regiments. In the army traditionally the name of the major organised unit of one type of weapon.
resistance
Resistance against the enemy. Often also with armed resources.
track
The track of a tank.