The full name of the so-called China War Memorial Medal, is Medal in Commemoration of Victory in the Resistance Against Aggression. It was established by the Republic of China, common known as Taiwan, in 1944 and was first issued in October 1946. It was issued to all servicemen and other people who assisted the Chinese Armies in the war against Japan during World War Two. Both military and civilians could be awarded. The most well known group of recipients were about 200 veterans of the 14th Air Force, the Flying Tigers. It was presented on a special ceremony on August 2nd 1975 in New Orleans.

The medal was authorized to wear by Public Law 80-314 for military of the United States Armed Forces for the period from December 7th 1941 through to July 24th 1948. The effective dates for the medal were December 8th 1941 to September 2nd 1945. Between these dates one had to serve for at least 30 days.

The obverse shows the Marco Polo Bridge over the Yeng-ding river. It symbolizes the outbreak of the Sino-Japanese war on July 7th 1937, when Japanese military attacked the town of Lukou-Chiao, which means "Marco Polo Bridge". Above the bridge the flags of the Republic of China and her Armed Forces can be found to symbolize the unity of the Chinese people. Between the flag stands a portrait of Chiang Kai-shek as Chairman of the Military Committee of the National Government during the war. In the background a city can be seen. The reverse shows a panel with the notation No. with a space open for a number or a name. Above and below that Chinese characters can be found that say what the medal stands for. The ribbon shows a central stripe bordered on both sides with a bleu smaller stripe and a red edge stripe. In the centre a Chinese sunburst symbol is placed. 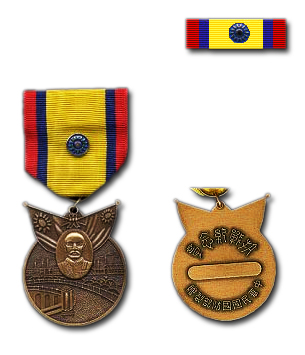