The Legion of Merit is the only US decoration with classes and is awarded to all members of the US Armed Forces or the Governemnt of the Phillippines for outstanding service, fidelity or loyalty in either combat or non-combat positions.
Awards of the Legion are made in the name of the President by the War Department or by commanders specially authorized by the Department.
US military personnel are awarded without diferention in degrees, foreigners -excluding civilians- for all classes; these are: Chief Commander, Commander, Officer and Legionnaire. Awards to foreigners must meet very high standards.
The Legion can be awarded only once, for further acts of galantry, a bronze oak leaf cluster can be awarded.
The badge is a five-rayed white cross with double points, each point tipped with a golden ball. The cross is edged with red and rests on a green wreath with a blue centre containing 13 white stars, the number of states from which the Union was formed 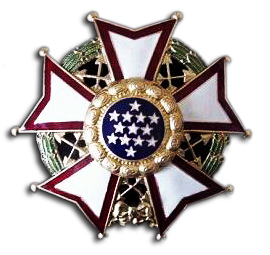