Awarded to naval officers for skillfull, agressive actions and personal leadership in defensive actions resulting in great loss to the enemy and hindering its missions.
The badge is a silver, pentagonal star, between the points are anchors with split shanks with enamelled red rubys between the shanks. In the center, surrounded by a chain, is a disc with the profile of Admiral Nakhimow on a silver ground, facing left and wearing a peaked cap. The image is flanked by the inscription in Cyrillic: Admiral Nahkimov, at the bottom by a laurel wreath with an image of the hammer and sickle in its center. The reverse shows the serial number. The ribbon is orange with two broad black stripes. 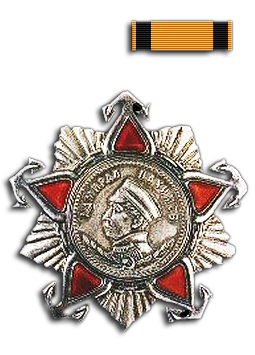