Citation (general):
"For distinguished services in the Middle East during the period December, 1940, to February, 1941."

Citation:
"On the night of the 20th / 21st March 1943, the task of a Battalion of the Green Howards was to attack and capture an important feature on the left flank of the main attack on the Mareth Line. The defence of this feature was very strong and it was protected by an anti-tank ditch twelve feet wide and eight feet deep with minefields on both sides. It formed a new part of the main defences of the Mareth Line and the successful capture of this feature was vital to the success of the main attack.
From the time the attack was launched the Battalion was subjected to the most intense fire from artillery, machine-guns and mortars and it appeared more than probable that the Battalion would be held up, entailing failure of the main attack. Realizing the seriousness of the situation Lieutenant-Colonel Seagrim placed himself at the head of his Battalion which was, at the time, suffering heavy casualties, and led it through the hail of fire. He personally helped the team which was placing the scaling ladder over the anti-tank ditch, and was himself the first to cross it. He led the assault firing his pistol, throwing grenades and personally assaulting two machine-gun posts which were holding up the advance of one of his Companies. It is estimated that in this phase he killed or captured twenty Germans.
This display of leadership and personal courage led directly to the capture of the objective. When dawn broke the Battalion was firmly established on the position, which was of obvious importance to the enemy who immediately made every effort to regain it. Every post was mortared and machine-gunned unmercifully and movement became practically impossible but Lieutenant-Colonel Seagrim was quite undeterred. He moved from post to post organising and directing the fire until the attackers were wiped out to a man.
By his valour, disregard for personal safety and outstanding example he so inspired his men that the Battalion successfully took and held its objective thereby allowing the attack to proceed. Lieutenant Colonel Seagrim subsequently died of wounds received in action." 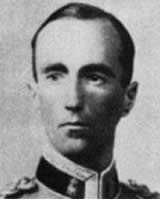