Johannes-Matthias Hönscheid was a war correspondent for the Luftwaffe.
After his education in Frankfurt am Main, he joined the Luftnachrichtenkompanie, Fliegerhorst Fritzlar on 15th January 1942. From 1st September 1942, Hönscheid served as Kriegsberichter der Luftwaffe with the German/Italian newspaper "Il Popolo di Sicilia" in Catania. During this period he flew as gunner with III.LG1 and Kampfgeschwader 54. He flew a total of 28 missions and shot down one aircraft. After this he was placed as Kriegsberichter at Rommels headquarter and the Oberbefehlshaber Süd (Kesselring). Next, Hönscheid was transferred to 1.Fallschirmjäger-Division and took part in operations on Sicily with Bataillon Grasmehl. During the fightings at Monte Cassino he destroyed seven enemy tanks. During this period he was taken prisoner by the British, but managed to escape. During his escape he was injured three times. After rocovering he served from 14th September 1944 as Kriegsberichter with the Heer at the Oberkommando der Wehrmacht. He acted as Referatleiter for the placing of journalists, military censor, liaison officer to Goebbels and as Kriegstagebuchführer at the Führerhauptquartier. His last occupation during the war was Kriegsberichter and Pressesprecher (press liaison) with the Reichsregierung Dönitz at Plön and Flensburg. He was POW with the British for a short time. His last achieved rank was Leutnant der Reserve (1st March 1945.
After the war he became Chief-editor and publisher in Munich. Hie died at the age of 78 years.

From the Typewriter to the Knights Cross:

Feldwebel Hans Hönscheid knocked out 3 Sherman tanks with close combat weapons, captured 200 Englishmen on his own and thereby crushed an enemy penetration. When Hönscheid fell into enemy captivity he managed to escape and make his way back to his unit. Hönscheid had previously been serving as the editor of a frontline newspaper. This 22 year old Feldwebel became the first Knights Cross Holder of the Propagandatruppen. 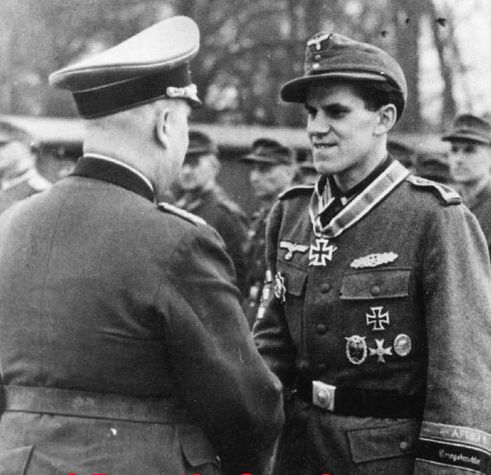