"For conspicuous gallantry and intrepidity at the risk of his life above and beyond the call of duty as commanding officer of a rifle company attached to the 2d Battalion, 9th Marines, 3d Marine Division, in action against enemy Japanese forces at Fonte Hill, Guam, 25-26 July 1944. Ordered to take that portion of the hill within his zone of action, Capt. Wilson initiated his attack in mid-afternoon, pushed up the rugged, open terrain against terrific machinegun and rifle fire for 300 yards and successfully captured the objective. Promptly assuming command of other disorganized units and motorized equipment in addition to his own company and 1 reinforcing platoon, he organized his night defenses in the face of continuous hostile fire and, although wounded 3 times during this 5-hour period, completed his disposition of men and guns before retiring to the company command post for medical attention. Shortly thereafter, when the enemy launched the first of a series of savage counterattacks lasting all night, he voluntarily rejoined his besieged units and repeatedly exposed himself to the merciless hail of shrapnel and bullets, dashing 50 yards into the open on 1 occasion to rescue a wounded marine Iying helpless beyond the frontlines. Fighting fiercely in hand-to-hand encounters, he led his men in furiously waged battle for approximately 10 hours, tenaciously holding his line and repelling the fanatically renewed counterthrusts until he succeeded in crushing the last efforts of the hard-pressed Japanese early the following morning. Then organizing a 17-man patrol, he immediately advanced upon a strategic slope essential to the security of his position and, boldly defying intense mortar, machinegun, and rifle fire which struck down 13 of his men, drove relentlessly forward with the remnants of his patrol to seize the vital ground. By his indomitable leadership, daring combat tactics, and valor in the face of overwhelming odds, Capt. Wilson succeeded in capturing and holding the strategic high ground in his regimental sector, thereby contributing essentially to the success of his regimental mission and to the annihilation of 350 Japanese troops. His inspiring conduct throughout the critical periods of this decisive action sustains and enhances the highest traditions of the U.S. Naval Service."

"For exceptionally meritorious conduct in the performance of outstanding services to the Government of the United States while serving as Assistant Chief of Staff, G-3, FIRST Marine Division, in the Republic of Vietnam."

"For exceptionally meritorious conduct in the performance of outstanding services to the Government of the United States while serving as Chief of Staff, Headquarters, Fleet Marine Force, Pacific, from August 1968 to March 1970."

Received this second LoM as his first Gold Star to be worn on the ribbon of the first.

"For exceptionally meritorious conduct in the performance of outstanding services to the Government of the United States while serving as Commanding General, I Marine Amphibious Force, THIRD Marine Division from March 1970 to April 1971."

Received this third LoM as his second Gold Star to be worn on the ribbon of the first.

Received this second DDSM as Bronze Oak Cluster to be worn on the ribbon of the first.

With Palm and Gold Star

Commander to the Legion of Honor 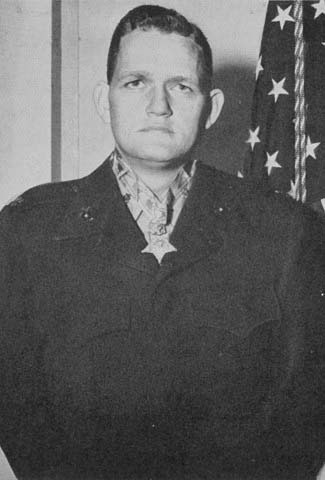