Sultan Amet-Khan was born October 25th, 1920 in the village of Alupka in the Crimea. His father came from Dagestan and his mother was a Tartar. Before the war, while being employed as an assistant-boilermaker in an engineshed, he learned to fly in a flying club and in 1939, he registered in the army. His request for pilot training was granted and he was assigned to the School of Aviation in the city of Kachinsk.
He earned his wings in 1940 and when the Great Patriotic War against Germany began in 1941, he was posted to 4.IAP (Fighterregiment) based in the city of Odessa as Mladshy Leitenant (Junior Lieutenant). Until the fall of 1941, he flew 130 missions in the obsolete Polikarpov I-153 biplane, mainly in a ground attack role. Later on, he flew the British Hawker Hurricane fighter and scored his first victory on May 31st, 1942 near Yaroslavl in the northern area of central Russia. The young pilot intercepted a Junkers Ju-88D on a reconnaissance mission. The experienced German pilot however managed to manoeuvre his plane behind his opponent and launched a counterattack. As his armament failed, Sultan spontaneously decided to ram his opponent and managed to escape with his parachute at the last moment.
At the end of October 1942, Amet-Khan, with 9 victories to his credit, was transferred to the newly formed 9 GIAP/Gvardeiskii, under the command of a veteran from the Spanish Civil War, Lev Shetstakov. The regiment, consisting solely of pilots with more than five victories, was moved to the Stalingrad Front. Sultan himself was in command of III/9 GIAP.
Halfway through February 1943, 9 GIAP became a regiment of 286 IAD (Destruction Air Division) and moved to Rostov. On March 25th, 1943, Sultan and his squadron of Yakovlev Yak 1-M fighters entered a fierce engagement as they intercepted a group of Heinkel He-111 bombers, escorted by Messerschmitt Bf-109 fighters on their way to Bataisk and Rostov. The entire German assault force was annihilated and consequently, their targets of railwaystations and depots remained unscathed. Amet-Khan himself downed a bomber and a fighter.
July 1943, Kapitan Amet-Khan flying a Bell P-39 Airacobra in the region around Mius and Donbass, downed two enemy fighters during the army's attempt to break through the heavily defended German line near the River Mius. He led eight P-39's against 18 Junkers Ju-87 Stuka's which were on their way to bomb the Russian advance. The Russian pilots destroyed five enemy aircraft without losses of their own and thwarted the German mission. Four days after this action, he was awarded the Zolotaja Zvezda (Gold Star of the Hero of the Soviet Union) for the first time.
On one of his patrols, he intercepted a German reconnaissnace plane and forced it to land on the nearest friendly airbase. As his comrades stood guard in the air, he landed himself and took the German officer as prisoner. It proved to be a good catch as the prisoner revealed valuable information on the enemy positions.
During April and May 1944, he participated in the heavy fighting around Sebastopol and shot his first two Focke-Wulf Fw-190's belonging to SG 2 (Schlachtgeschwader).
November 1944, 9 GIAP (Guards Destruction Air Regiment) was equiped with the Lavochkin La-7 fighter and integrated into 303 IAD (Destruction Air Division) based in Latvia on the 3rd Beloruskii (Byelorussian) front.
At the end of the war, Sultan Amet-Khan had risen to Major with 603 missions and had fought in 150 air battles, scoring 30 victories himself and sharing in 19. He fought over Briansk, Stalingrad, in the southwest, in the south and on the 4th Ukranian and 3rd Byelorussian fronts. June 29th, 1945 he was awarded a second Zolotaja Zvezda. In 1946, he resigned from the army and started a distinguished career as a test pilot. He died February 1st, 1971 while test flying the Tupolev Tu-16. Sultan Amet-Khan lies buried in Novodevichye Cemetery in Moscow. 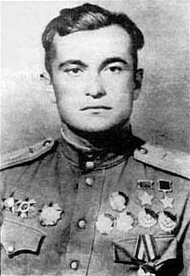 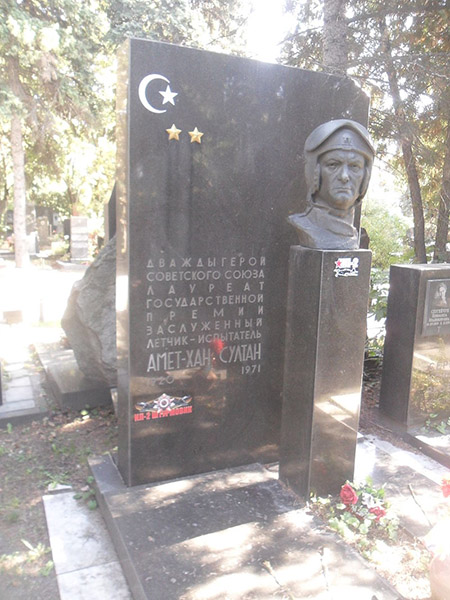