Ary Romijn was born March 11th, 1895, in Flushing. At the age of 14 he took to sea aboard the Norwegian barque Dea and later aboard another sailing vessel of the same shipping company up to World War One. In this war he was drafted into 14th Regiment Infantry and billeted in Westkapelle. During this period he continued studying merchant shipping and received a diploma in 1916. After World War One Ary Romijn entered into employment with the Rotterdam Lloyd, earning his degree as 2nd Officer Steamships; November 27th, 1917 he was appointed 3rd Officer aboard the Abbekerk. He and the vessel were simultaneously transferred to the United Netherlands Naval Company. September 20th, 1936 he was appointed captain of the Hoogkerk.
At the outbreak of World War Two, he transferred to the Almkerk of the Holland-Australia Line. After this vessel had been torpedoed (without loss of lives), Ary Romijn was transferred to the "Aagtekerk". Under his command the ship was awarded the Dutch Royal Commendation. When this vessel was sunk, Ary Romijn sustained severe injuries and was forced to recuperate in hospital. After his recovery he was given command of the Randfontijn where he served until the end of the war.
After the war, he was given command of the Oranjefontijn in 1946.
Ary Romijn passed away on February 16th, 1968.

Royal Decree No.7, dated June 5th, 1942. Awarded with the Bronze Cross and later replaced with a Bronze Lion.

Commendation:
"A ship had been torpedoed in convoy. The Fourth Officer of the ship next astern sighten the periscope of a submarine 10 degrees on the starboard bow about 130 yards away. The ship was already turning to starboard to get out of the way of the torpedoed ship, but the Master promptly turned her more rapidly. When the periscope, which was sticking 10 feet out of the water, was abreast the starboard bow and not more than 10 yards away, the instrument was sprayed with machine gun fire. When abeam of No. 3 hatch (before the bridge) the periscope was no longer vertical but heeling towards the ship. Abeam of the bridge the stern and part of the hull were seen sticking about three feet out of the sea, suggesting that the submarine was standing on end in the sea. The ship then turned further and hit the submarine again with her stern.
When the submarine came free of the stern four shells were fired at her as she disappeared. The success was due to the prompt action taken by the Master and the rapid way in which his orders were executed by the Chief and Third Engineers in the engine-room, and by the Third Officer, who took the wheel, as the rapid sequence of orders was beyond the native quarter-master. The Chief Officer was most efficient in seeing that all orders were carried out, and the gunners were very prompt in opening fire the moment their guns could bear."

Royal Decree No.43, dated October 19th, 1945.
Second KV received in the form of a clasp to be worn on the ribbon of the first KV.

Recommendation:
For having distinguisghed himself in battle by eminent deeds of courage, tact and loyalty as captain of the MV Aagtekerk which had been attacked in January 1942 in the Atlantic Ocean on her way from Glasgow to Suez, at first by a U-boot and subsequently by an aircraft, having conducted himself tactfully and courageously and skillfully having manoeuvred his vessel with the result that the U-boot was probably destroyed and the aerial attack repulsed; further, as captain of the same vessel which, acting as decoy ship, was bombed and set on fire by hostile aircraft, having displayed eminent tact, great devotion to duty and self sacrifice in a difficult and hazardous situation while giving orders in the interest of saving ship and cargo and the safety of those on board despite the serious injury he sustained at the outset of the action.

This decoration was later revoced to be given the Military Order of William 4th Class. Details yet unknown, awarded to replace the Bronze Cross with Honorably Mentioning.

Citation:
"Captain Ary Romeijn is most strongly recommended for the immediate award of a decoration. When his ship was bombed and sunk he showed great gallantry. Although he was so badly burned about the face and arms as to be unrecognisable, he did not give up command until he had done his utmost to save his ship, and ensure the safety of his crew. He is now in hospital, condition serious." 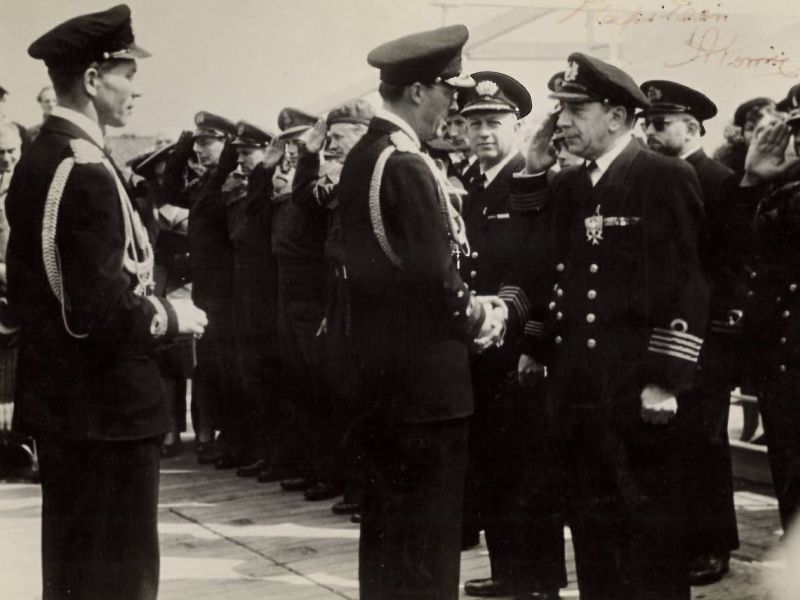