Charles ("Chuck") Yeager was born in Myra, West Virginia on February 13, 1923 and grew up in the nearby village of Hamlin. His father was a driller for natural gas in the West Virginia coal fields. Immediately upon graduation from high school he enlisted in the United States Army Air Corps as an aircraft mechanic at Tonopah, Nevada to serve in World War II.
The first time he went up for an airplane ride (as a passenger with a maintenance officer) he went sick. Soon after this flight, the Air Corps (as it was in 1942) decided to start a "Flying Sergeant" program, meaning that you didn't have to be a college graduate to become a pilot for the Air Corps. This program did not last long, and just before Yeager earned his wings, the programme was scrapped. His fighter training was completed in a Bell P-39 Airacobra.
Based at Leiston in Norfolk, England, Yeager flew a North American P-51 Mustang for the 363rd Fighter Squadron. After shooting down a ME-109 and a HE-111K he was downed himself on his eighth combat mission over German-occupied France on March 5, 1944.
He evaded capture when the French Maquis helped him to reach the safety of the Spanish border. Yeager remained in Spain until the summer of 1944 when he was released to the British at Gibraltar and returned to England. When he returned to his squadron, they could not believe that this was the same Yeager that had been shot down. He was twenty pounds heavier and had looked like he had been on vacation with a serious suntan.
Initially being told he could no longer fly missions over Europe (he could have been tortured by the Gestapo into giving away secrets of the French Maquis and then shot), he took his case to General Dwight D. Eisenhower and pleaded to be allowed to continue his tour. Pretty soon after his return, the Maquis were openly fighting the German's on the ground. Yeager's squadron commander Ed Hiro gave him the news that General Eisenhower had decided in his favour that he could continue his fight.
He returned to his squadron and flew 56 more combat missions, shooting down 11 more German aircraft. Between July and October he was promoted from second lieutenant to captain.
On October 12th 1944, Yeager was leading the group on bomber escort duty over Bremen. He scored five victories (5 ME-109s) on that mission, the first ever ace in a day. Stars and Stripes put Yeager on the front page, the headline went  FIVE KILLS VINDICATE IKES DECISION. His group CO subsequently recommended him for the Silver Star. Yeager was also the first to shoot down one of the German's Me-262 twin-jet fighter's and damaged two more. On November 20 he shot down four FW-190s. By the end of the war, at which time he was 22 years old, he was credited with having shot down 13.5 German planes.
After the war he was put in charge of pilot training for experimental aircraft, and on October 14, 1947 became the first person to break the sound barrier, flying a rocket powered Bell X-1 jet. He helped train the first U.S. astronauts and flew combat missions over Vietnam in the 1960s. In 1976, Chuck Yeager was awarded the Congressional Gold Medal, presented to him by President Gerald Ford. President Ronald Reagan later honored him with the Presidential Medal of Freedom.
Yeager retired from active duty on March 1, 1975. Remained as a Consultant Test Pilot though at Edwards AFB, California.
In the 1980s Yeager became a celebrity, thanks in large part to the 1984 film made from Tom Wolfe's book The Right Stuff, an account of the early U.S. space program.
He currently (February 2010) lives in Oroville, California with his wife.

For helping rescue a fellow airman from Occupied France.
With V device 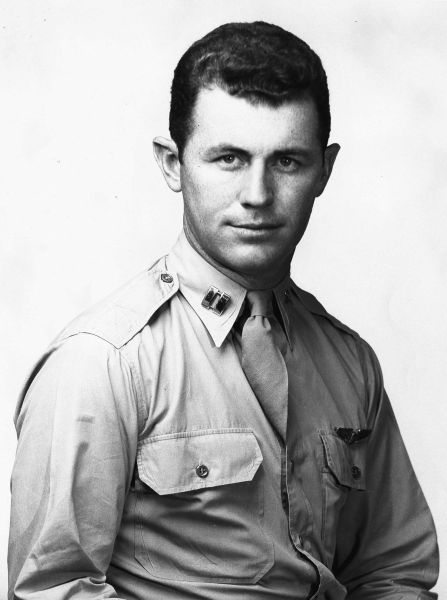