Stan Hill was the son of Major-General Walter Hill and attended Marlborough College where he headed the Officer Training Corps. He joined the Army in 1930 and attended the Military Academy at Sandhurst where he excelled in all aspects of Military life. He was an outstanding athlete, and became the Captain of the athletics team there, and due primarily to his great strides when running was duly nicknamed "Speedy". He became a Sword of Honour recipient whilst at Sandhurst. He was commissioned into the 2nd Battalion The Royal Fusiliers but became disillusioned with the uneventful military life of pre war England and resigned his commission in early 1936 and worked for his families Ferry Company for three years.

In 1939 at the outbreak of the Second World War Hill re enlisted into his old Regiment and left for France as a Captain in the 2nd Battalion the Royal Fusiliers, advance Party. He led his platoon on the Maginot Line for two months before being posted to Army Headquarters as a staff captain.
In May 1940, Hill was a member of Field Marshal Viscount Gort's command post, playing a leading part in the civilian evacuation of Brussels and La Panne beach during the final phase of the withdrawal. He returned to Dover in the last destroyer to leave Dunkirk.

Following promotion to Major in 1940, he was posted to Northern Ireland. He was dispatched to Dublin to plan the evacuation of British nationals in the event of enemy landings in Southern Ireland. On the 15th of August, 1941, James Hill was one of the very first officers to join the newly formed Parachute Regiment, and in early 1942 took command of the 1st Battalion.

The Battalion's first operation was a parachute assault into Souk El Arba a small town, deep behind German lines in Tunisia. Hill lead two companies on a frontal assault and whilst doing so decided to personally take out a number of tanks in line, still parked, but their crews still frantically taking up position within them. He took out his service pistol and thrust it through the open port hole and fired a single shot of the first tank, the Italian crew inside immediately surrendered. He then went to the second tank and tapped on the closed turret with the same result... immediate surrender. Thinking he was on a roll, he approached the third tank expecting surrender, only to be faced with a German tank crew who emerged firing their personal weapons and throwing grenades. Hill dispensed with the crew fairly quickly, but before doing so received three gunshot wounds to the chest. He was rushed back to the Battalion Regimental Aid Post at Beja, where he was operated. He was evacuated to Algiers and then to England soon after and admitted in a hospital. After two months, in december 1941 he was discharged.

On D-Day, Hill was given overall command of the Merville Battery operation. Hill landed in the River Dives near Cabourg. At Sallenelles, Hill and a group of men of the 9th Parachute Battalion were accidentally bombed by Allied aircraft; 17 of his men were killed. Hill was injured but, after giving morphia to the wounded, he reported to his divisional commander, who confirmed that the battery at Merville had been captured after a ferocious fight, and that Hill's brigade had achieved all its objectives. Hill underwent surgery that afternoon, but refused to be evacuated and set up his headquarters at La Mesnil. In September 1944, the 3rd Parachute Brigade returned to England, but three months later it was back on the front line, covering the crossings of the River Meuse. In March 1945 Hill commanded the brigade in Operation Varsity, the battle of the Rhine Crossing, before pushing on to Wismar on the Baltic, arriving on May the 2nd just hours before the Russians.

In 1948, Hill joined the Board of Associated Coal & Wharf Companies and was President of the Powell Duffryn Group of companies in Canada from 1952 to 1958. He was Managing Director and Chairman of Cory Brothers from 1958 to 1970. In 1961, Hill became a Director of Powell Duffryn and was Vice-Chairman of the company from 1970 to 1976. He was also a Director of Lloyds Bank from 1972 to 1979. He spent his latter years living in Chichester, where he continued his passion of his lifelong hobby of birdwatching. In June 2004, he attended the 60th Anniversary of the Normandy landings. A life-size bronze statue of him with his thumbstick, sited at Le Mesnil crossroads, the central point of the 3rd Parachute Brigades defensive position on D-Day, was unveiled by the Prince of Wales, Colonel-in-Chief of the Parachute Regiment.

Recommendation:
"This officer was detailed to undertake duties in the forward areas in connection with traffic control and the evacuation of refugees. These duties he carried out with enthusiasm and skill, and was often placed in positions of great personal danger. During the final embarkation he was employed at Dunkirk. He performed valuable work troughout, and I recommend him for the award of the Military Cross."
Recommendation by Brigadier J. Whitehead
LG 34893/4262

Recommendation:
"For inspiring leadership and undaunted courage. This officer who led his battalion after a flight of some 400 miles, and a parachute drop, displayed in every occasion conspicuous gallantry under heavy enemy fire. Leading his Battalion in raids against enemy A.F.V's he personally destroyed at least two and was mainly responsible for the succesful results received. In a raid on an enemy post he led his Battalion forward under heavy machine gun fire and by his utter disregard of personal danger, and by his briljant handling, was succesful in entirely destroying the posts and capturing a number of prisoners. This leadership and courage was an inspiration not only to his own troops but also to the French who recognises his gallantry by the award of the Legion d'Honneur. On one occasion although severely wounded he continued to command his battalion until the succesful completion of the operation."
LG 35898/744

Recommendation:
"Magnificent officer, remarkable for his courage and daring, with an absolute agressive spirit, has always responded eagerly to requests for cooperation made ​​by the French command. From arrival in the area, organized and led personally bold helping hands in forward lines. Was severely wounded on the night of November 23 to 24, 1942 in Northern SIDI N'SIR, during one of the operations, leading a mixed detachment consisting of English paratroopers and a French section. Has inflicted heavy casualties to the enemy and has taken prisoners."
General Orders No. 6, signed by General Juin November 1942.
WO 373/185

Recommendation:
"For conspicuous gallantry and devotion to duty from D Day until 1st September. Up to 11th June Brigadier Hill with three weak parachute battalions mustering approximately 1200 men held the important ridge from Chateau St Come to the outskirts of Troarn. During this time he was repeatedly attacked by the 346 Division: the line at St Come was only held as a result of a brilliant and daring counter-attack by a company of Canadian Parachutists led by Brigadier Hill himself. From 11th June till 17th August his brigade was almost continuously in the line in the Le Mesnil cross-roads area. Here his example and personal courage directly contributed to the high state of morale which the troops under his command maintained. On the 17th August his brigade led the advance of the Division to Dozule. Under his leadership his brigade fought brilliantly and successfully at the Annebault ridge and again at Beuzeville. Throughout the whole period Brigadier Hill has shown an exceptionally high standard of gallantry and devotion to duty. He was wounded at the commencement of the campaign and although this wound often gave him considerable pain he never left his post."
Second DSO awarded as a bar to be worn on the ribbon of the first DSO
LG 37004/1709

Recommendation:
"Brigadier Hill has commanded 3 Parachute Brigade for two years. Throughout the campaign this officer has performed magnificent service. He has raised his Brigade to the very highest pitch of efficiency and fighting spirit. In Normandy, in spite of being wounded himself and suffering heavy casualties in his brigade, every task set was successfully accomplished. The Brigadier showed the greatest gallantry throughout. In the difficult conditions in the Ardennes and on the Maas, his unflagging enthusiasm kept his brigade at concert pitch. He was himself the inspiration of the vigorous offensive patrolling carried out across the River Maas. In Germany Brigadier Hill rose to even greater heights. His men had a fine fighting start, in which, after suffering considerable casualties on landing, they utterly worsted the Germans and killed or captured a great number of them. In the rapid advance which followed, his brigade gained even greater distinction. On three separate occasions they led the division over long distances into hostile country. Brigadier Hill was the dominant figure in these advances. Travelling well forward himself, showed an unquenchable determination to push on at whatever cost. This not only repeatedly surprised the enemy, but by rapid seizure of distant objectives saved our own troops many casualties. His brigade finished triumphantly by reaching the Baltic at 1400 hrs on 2nd May, after advancing 58 miles in one day.
Brigadier Hill's courage and dash in action are almost legendary. His skilful and inspiring leadership has been largely responsible for the great successes achieved by his Brigade."
Third DSO awarded as second bar to be worn on the ribbon of the first DSO. 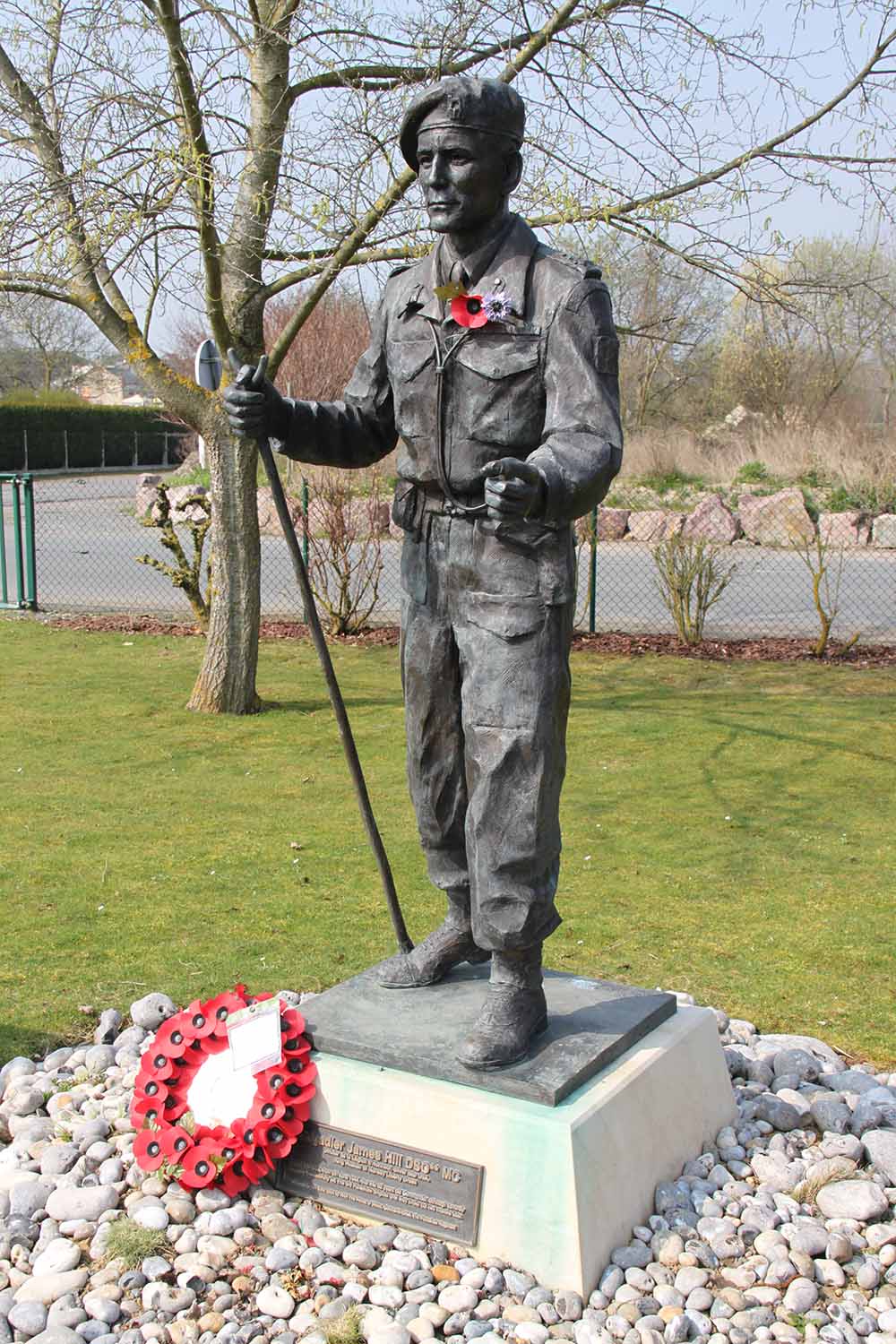