Angus MacLeay was a sailor on board ss Thistlegorm, a merchantman.
The Thistlegorm set sail from Glasgow on June 2 1941, carrying Bedford trucks, Brencarriers, motorcycles, Brenguns and ammunition, .303 rifles and two railwayengines for the British troops in North-Africa.
At the time, the Meditterranean was dominated by the Germans. Therefore the Thistlegorm sailed by way of Cape Town and the east coast of Africa to the Red Sea. Due to a collision between a few ships in the Suez Canal, Thistlegorm could not leave port.
The Germans, who had been watching the build-up of British troops, were expecting convoys so they dispatched two Heinkel He 111 bombers from Crete to search for troop transports. They did not find any but they did find Thistlegorm. October 6th, 1941, Thistlegorm was hit by two bombs and sank due to exploding ammunition. Four sailors and five members of the Royal Gunnery crew lost their lives.
Today, the Thistlegorm, rediscovered by Jacques Cousteau is a popular diving site.

Citation:
"The ship was suddenly attacked by an enemy aircraft. She was set on fire and there was great danger of an explosion. Those of the crew who were amidships lowered the boats but some were trapped aft. These all jumped into the sea except one, Seaman McLeay, who saw a gunner lying unconscious by the poop winch. He took him on his back and made his way along the blazing ship to the Second Mate's boat. Most of McLeay's clothes were burnt and his feet were badly injured. Shortly after he had brought the unconscious gunner to safety, the ship blew up." 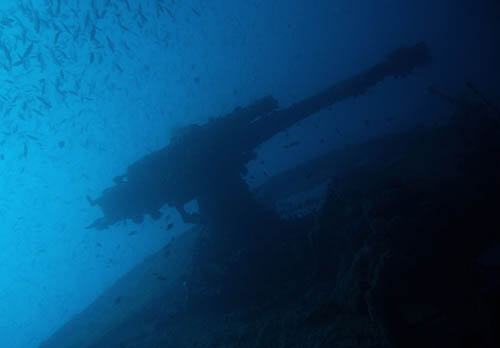