James King Aurness, later becoming actor and changing his name to James King Arkness, was born May 26th , 1923 in Minneapolis, the son of Rolf Cirkler Aurness and Ruth Duesler. After having been educated at John Burroughs Grade School, Washburn High School and West High School in Minneapolis, in June 1942 he wanted to join the army to become a navy pilot.
However, he was disqualified and in March 1943 he was drafted at Fort Snelling, Minnesota. During the war he served in the 3rd Infantry Division and came ashore on January 1944 in Anzio as a member of 2nd Platoon, Company E, 2nd Battalion, 7th Infantry Regiment. He was honorably discharged on January 29th , 1945.
After the war he studied at Beloit College in Wisconsin and started work as a a radioreporter with WLOL in Minneapolis in 1945. Afterwards he moved to Hollywood and went to work for RKO, changing his surname to Arness. He played his first movie role in "The Farmers Daughter"(1947), followed by parts in various movies and TV series, becoming famous for his role in Gunsmoke. In 1948 he was married for the first time, to Virginia Chapman whom he divorced in 1960. 1978 he married Janet Surtees, staying with her until his death on June 3rd, 2011. 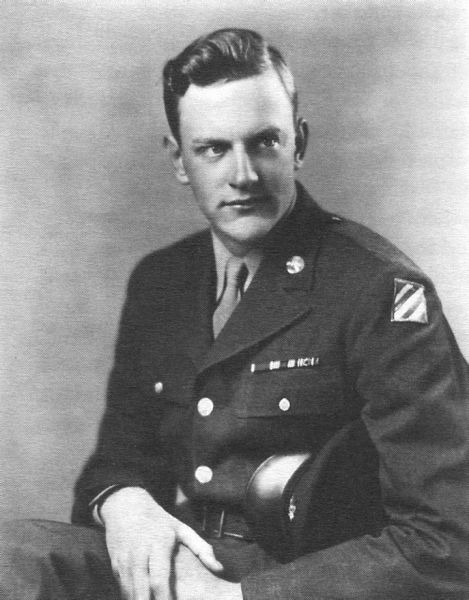