"For exceptionally meritorious service in a duty of great responsibility as Commanding Officer of the U.S.S. FANNING engaged in the important, exacting, and hazardous duty of patrolling the waters infested with enemy submarines and mines, in escorting and protecting vitally important convoys of troops and supplies through these waters, and in offensive and defensive action, vigorously and unremittingly prosecuted against all forms of enemy naval activity; and especially for an engagement on 17 November 1917, with the German submarine U-58, as a result of which the submarine was forced to come to the surface and surrender."

"For exceptionally meritorious and distinguished services to the Government of the United States, in a duty of great responsibility as Commander of Allied Naval Forces in the Southwest Pacific Area from 11 September 1942 to 23 November 1943. Vice Admiral Carpender coordinated all naval activities of both United States and Allied forces, utilizing to the utmost advantage the limited resources available. His wide professional experience, sound judgment and energy were of the greatest service in planning and executing combined operations; and his personal vigor and tact enlisted the enthusiastic cooperation of all forces under his command. His forces engaged initially in containing operations and subsequently in both naval and amphibious offensive operations with marked effectiveness in spite of limited means. Vice Admiral Carpender made an invaluable contribution to the success of the campaigns in the Southwest Pacific Area during this critical period."

"For exceptionally meritorious conduct in the performance of outstanding services to the Government of the United States as Commander SEVENTH Fleet and Commander Southwest Pacific Force during a vitally important period of active enemy operations, from 11 September 1942 to 26 November 1943. Rear Admiral Carpender displayed the highest qualities of judgment, leadership, initiative and employed to the utmost the forces in his command, which resulted in important and successful operations thereby aiding materially in the liberation of large and important areas from enemy occupation."

"For exceptionally meritorious conduct in the performance of outstanding services to the Government of the United States as Commandant of the NINTH Naval District, from 3 January 1944 to 31 August 1945. In accomplishing the efficient coordination and administration of the NINTH Naval District comprising thirteen states, he exhibited outstanding aggressiveness and administrative ability. The order of efficiency which he attained through the exercise of exceptional energy, sound judgment and leadership is in the best tradition of the Naval Service and contributed materially to the successful prosecution of the war."

For valuable services to the Allied Naval Forces at Lae & Finschafen.

Presented by the Australian Ambassador. 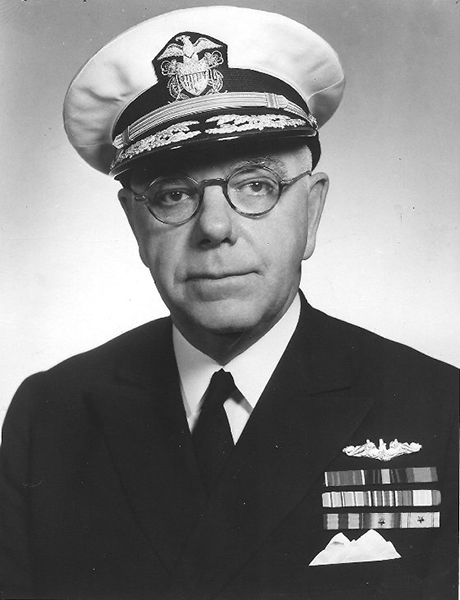