Colonel Ruby Bradley, one of the most decorated women in the U.S. Military history, died May 28 2002 in Hazard, Kentucky, at the age of 94 after a heart attack, and she was laid to rest in Arlington National Cemetery on July 2 2002, nearly 40 years after she retired from the U.S. Army.

Colonel Bradley entered the Army Nurse Corps as a surgical nurse in 1934. Several weeks after the attack on Pearl Harbor in 1941 she was captured and in 1943 she was moved to the Santo Tomas Internment Camp in Manila. For the next several months, she provided medical help to the prisoners and sought to feed starving children by shoving food into her pockets whenever she could, often going hungry herself.

The weight she shed made room in her uniform for smuggling surgical equipment into the prisoner-of-war camp that she used to assist in 230 operations and deliver 13 children.

On February 3, 1945, U.S. troops stormed the gates of the Japanese camp and liberated Colonel Bradley and her fellow prisoners, ending her three years of captivity. Later Colonel Bradley served as a frontline Army nurse in evacuation hospitals in Korea. Colonel Bradley retired from the U.S. Army in 1963.

Colonel Ruby Bradley received 34 national and international awards for her services during the Second World War and the Korea War.

With two bronze stars for participation in Philippine Islands and Luzon operations. 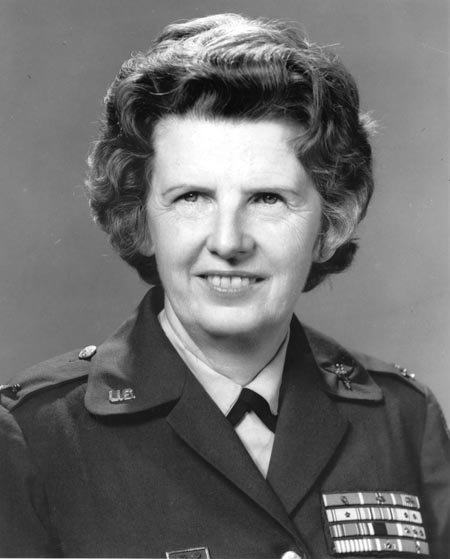