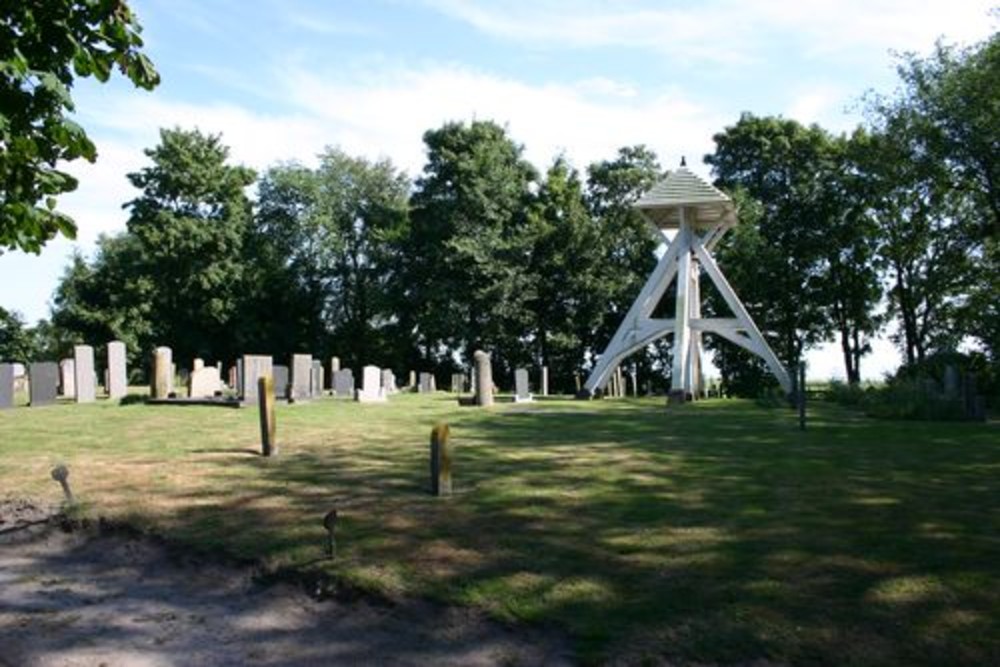 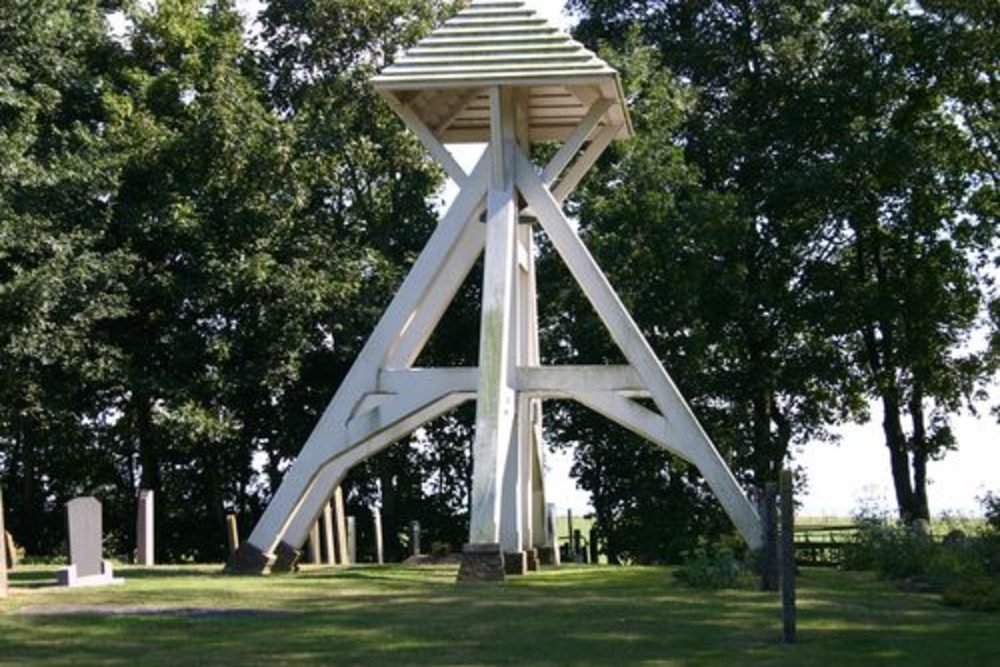 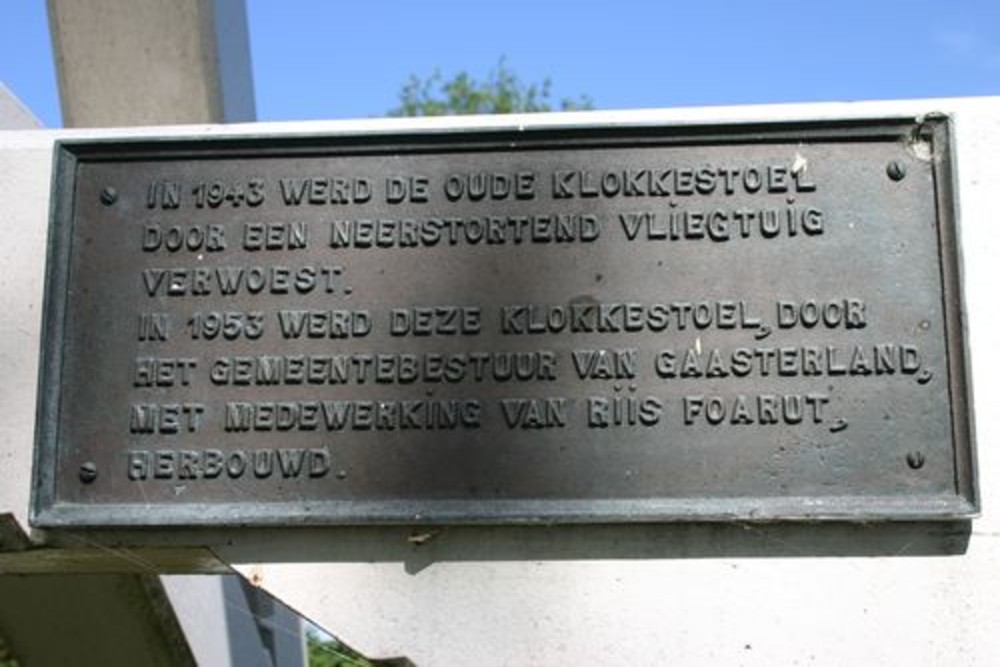 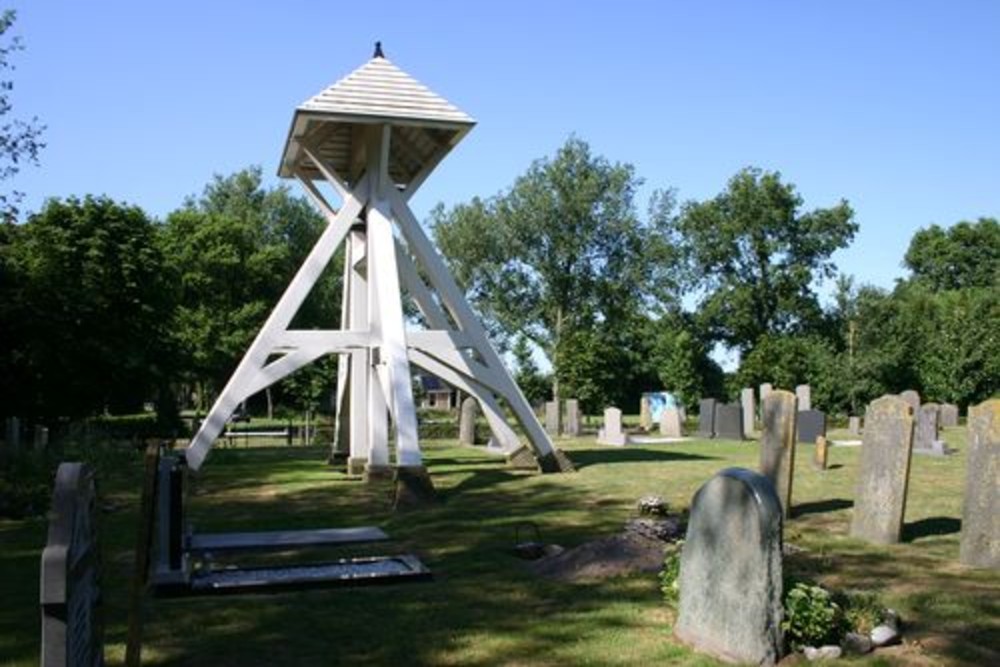 The belfry reminds the people of Mirns to the American bomber which on December 22, 1943 made an emergency landing here and destroyed the belfry in the cemetery and the seven crew members who perished here .

The names of the crew are:

Lt John Allens B-24, 42-7554, "Tail End Charlie" took part in a bombing-raid to the city of Osnabrück and was hit by a German air-to-air missile in the surroundings of the target-area on December 22, 1943.
One of the aircrafts engines got hit and the fuselage was also badly damaged, so that the doors of the aircraft could not be opened anymore. All communication between the pilots and the rest of the crew failed. The aircraft became a straggler and thus an easy prey for German fighters. The German fighters attacked the B-24 over the Northern Netherlands over and over again. In the area between Bolsward and Workum, the plane was so badly damaged that Lt Allen decided to make an emergency landing. There were likely wounded airmen on board, who were not able to bail out. The weather was bad and rainy. Somewhere near the village of Koudum, the B-24 came through the clouds, looking for a place to land. It was very hard to find a suitable terrain. The aircraft already flew above the IJsselmeer, when it turned back to the Frisian coast for a second attempt.
Lt Erwin Bevans and S/Sgt Harry Henry bailed out near Bakhuizen. T/Sgt John Elder left the plane only a few moments later. His parachute slowly floated away in the direction of the IJsselmeer and he eventually drowned in the cold sea water.
A last, desperate attempt to leave the aircraft was made by Lt Joseph Gill. He bailed out only moments before the crash and had not the time to wait a few seconds before opening his parachute. He had to pull the cord immediately and consequently the chute wrapped around the tail of the rapidly descending aircraft. Gill remained attached to the B-24 as it crashed.
Allens B-24 crashed on the small cemetery of Mirns. Not only the aircraft itself, but many gravestones and the bell-tower were completely destroyed on impact. The burning B-24 finally stopped in a small pasture, just on the other side of the road next to the cemetery. The flames were seen in the wide surroundings.

A resistance-fighter, Jan Keulen of Bakhuizen saw the crash happen and tried to pick up the surviving airmen. He found Harry Henry in a hotel near Rijs.
Jan Keulen spoke English very well, as he had lived in the United States for several years. He talked to Henry and gave him civilian clothes. The local family doctor checked his leg, which was hurt during the crash. It appeared that the wounds were not bad. Jan Keulen told Henry to wait for fifteen minutes and then to leave the hotel and wait in the nearby woods. The same was told to Erwin Bevans, who was also found by local people.
Then Jan Keulen left the hotel and he immediately went to the crash-site. It was already dark when he arrived there. The preacher from the RC Church in Bakhuizen  who was a prominent member of the resistance  was also there. The Germans allowed Father Schellaerts to have a look on the crash-site. They had just found Joseph Gill and asked the preacher to give him the last sacraments. However Gill was still alive.
The crash site was guarded by soldiers from the radar-station near Sondel. They showed everyone around the next day, but very much disliked their task. The mutilated bodies of the airmen were still on the scene. Apparently the commander of the radar-station, Zugführer Harald Thiedecke, had had an order to display the corpses like this and to show the people what had happened to the Terrorflieger. This was highly unusual, since Thiedecke was against the Nazi-regime and above all a very polite and humane person. On December 24, 1943 the corpses were buried on the RC graveyard of Bakhuizen.
That same day, the body of John Elder washed ashore. The Germans disobeyed their orders this time and brought him to the St. Odolphus Church in Bakhuizen. His body laid in state in the church and the Germans put a guard of honour in front of the coffin. Many people from the village came by to pay their honour to the airman.
In the meantime, 2 of the survivors had fallen into German hands. Harry Henry never had a chance to escape from the hotel. The Germans arrived before he could escape into the woods.

Henry had the luck that he was arrested by an old Feldwebel from Austria, who despised the Nazis as well. He was also from the radar station, where the German personnel were all against the Nazis. The soldiers used to play cards with persons in hiding and they warned them when they heard of upcoming razzias. They asked Henry to put his uniform on again and drove him to the radar station. The people from the village who helped Henry feared for their lives, but nothing happened. The Germans from the radar station knew exactly who had helped the airmen, but never talked about it again.
Bevans had more luck. He was not discovered and the resistance members saw a chance to move him further away from the crash-site. After a few days, the resistance arranged for an ambulance to pick up Bevins. It was actually a fake ambulance, with a woman dressed up in a nurses costume. The ambulance was driven by a resistance fighter and took Bevans to Leeuwarden, where he stayed for the rest of the war (473 days). One of his helpers was the well known Krijn van den Helm, who was killed by the Germans in August 1944.
Joseph Gill was also taken capture. He had a bad jaw-fracture, but did not receive any medical help from the Germans. When he was in a prisoner of war camp, an imprisoned dentist finally treated him. Lt. Joseph Gill and S/Sgt Harry Henry both survived the war.
After the war, the corpses of the USAAF airmen were reburied at the Netherlands American Cemetery and Memorial near Margraten. S/Sgt Joseph J. Pavelko remains buried in Margraten. The other 6 airmens bodies were reinterred back in the U.S.
The cemetery in Mirns still bears the marks of the tragedy which happened in 1943. There are only a few grave-stones and some of the trees which surround the cemetery are missing. The bell-tower was replaced after the war. In December 1964, when workers were digging a new grave, they found a propeller-blade of the B-24. It was a silent reminder to the occurrences on that disastrous December-afternoon, 21 years earlier.