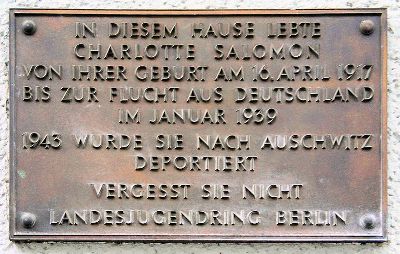 This plaque commemorates Charlotte Salomon, a Jewish painter who lived here until her emigration to France, in 1939. In 1943, she was arrested there by the Gestapo and deported to Auschwitz-Birkenau, where she was murdered.

The German text on the plaque says:
In this house lived
Charlotte Salomon
from her birth on 16 April 1917
until her escape out of Germany
in January 1939.
1943 she was deported to Auschwitz.
Dont forget her.
Landesjugendring Berlin