The Marine Corps Expeditionary Medal can be awarded to all officers and enlisted men of the Marine Corps that actually landed on foreign territory and engaged in operations against armed opposition. It could also be awarded for operations under circumstances that were pointed as to merit special recognition and of which service no capmaign medal could be awarded. The medal could only be awarded once. When a person participated in more expeditions, it was to be recognized by issue of one or more bronze stars to be worn on the ribbon of the medal. For each fifth expedition the four bronze ones received previous were to be repaced by a silve star.

During the Second World War only one expedition was recognized for the medal, only for personnel who served in the defense of Wake Island betwee 7th and 22nd December 1941. With the medal an additional bar was to be worn on the ribbon with the inscription "WAKE ISLAND". On the service ribbon a silver "W" was to be worn.

The medal was designed by Walker Hancock and the earlier ribbon was designed by Major S.W. Bogan (USMC). The medal measures one and a quarter inch in diameter. The obverse shows a Marine in full pack, charging with fixed bayonet. At the base there are two horizontal wave scrolls. On the upper half, near the edge of the medal the word "EXPEDITIONS" is placed in raised letters. The reverse shows a left facing eagle alight upon an anchor. The flukes of the anchor are on the right side of the medallion. The eagle grasps spigs of laurel, which extend beyond the anchor in both directions. Above the eagle the raised words "UNITED STATES MARINE CORPS" can be seen, above the laurel on the left the word "FOR" and over the laurel on the right the word "SERVICE".
The ribbon shows a khaki background with two broad light gold stripes on each side. 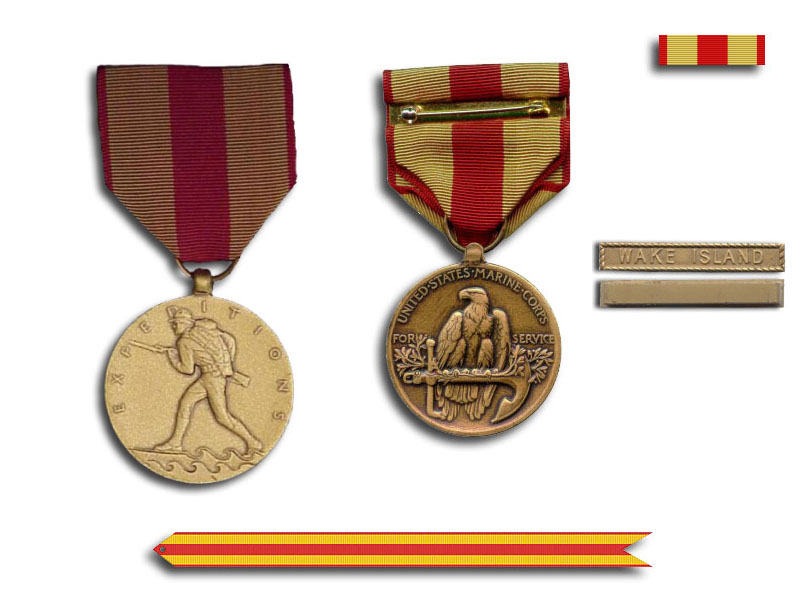