The President of the United States of America takes pleasure in presenting the Navy Cross to Major James R. Roosevelt (MCSN: 0-5477), United States Marine Corps Reserve, for extraordinary heroism and distinguished service as Executive Officer, and second in command of the SECOND Marine Raider Battalion, during the Marine Raider Expedition against the Japanese-held island of Makin in the Gilbert Islands on 17 and 18 August 1942. Risking his own life over and beyond the ordinary call of duty, Major Roosevelt continually exposed himself to intense machine-gun and sniper fire to ensure effective control of operations from the command post. As a result of his successful maintenance of communications with his supporting vessels, two enemy surface ships, whose presence was reported, were destroyed by gun fire. Later during evacuation, he displayed exemplary courage in personally rescuing three men from drowning in the heavy surf. His gallant conduct and his inspiring devotion to duty were in keeping with the highest traditions of the United States Naval Service.

The President of the United States of America, authorized by Act of Congress July 9, 1918, takes pleasure in presenting the Silver Star (Army Award) to Lieutenant Colonel James R. Roosevelt (MCSN: 0-5477), United States Marine Corps, for gallantry in action at Makin Atoll, Gilbert Islands, 20 to 23 November 1943. Attached as an observer to the units of the 27th Infantry Division which effected the landing on Makin Atoll, Lieutenant Colonel Roosevelt voluntarily sought out the scenes of the heaviest fighting. Throughout the three-day period, he continually accompanied the leading elements of the assault, exposing himself to constant danger. His calmness under fore and presence among the foremost elements of the attacking force was a source of inspiration to all ranks. 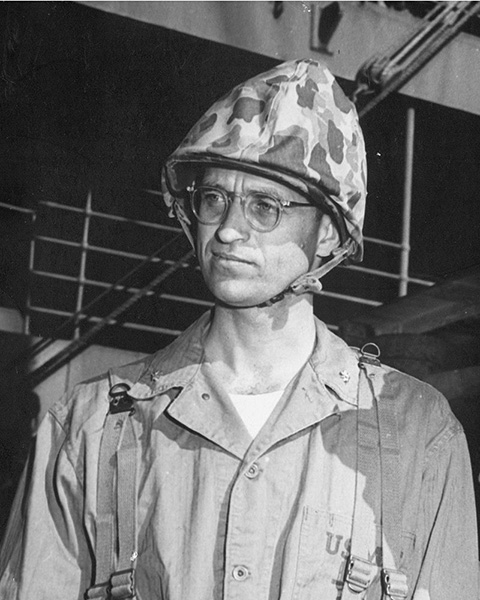