Citation:
"For gallantry in action 17 February 1944 near Aprilia, Italy. During an engagement with the enemy Corporal Chilson, together with three other men, was taken prisoner of war and forced to act as litter-bearer for the German forces. Taking advantage of the confusion caused by an artillery concentration, the group escaped, capturing an enemy outpost of four men and successfully returned to friendly lines with much valuable information as to enemy dispositions and morale. The information led to offensive action, resulting in capture of 40 German prisoners with very little loss to our troops. The gallantry, fortitude, and sense of duty displayed by Corporal Chilson was largely responsible for the success of the attack and is in keeping with the high traditions of the armed forces."

Citation:
"For gallantry in action on 26 November 1944 near Denshein, France. As his platoon was accomplishing it's mission of cutting the main road leading from Denshein, it was suddenly halted by enemy machine gun and rifle fire from a road block. Setting his machine gun up as a base of fire and under cover of darkness, out - flanked the enemy position, crawling to within twenty yards of the road block from where he threw two hand grenades and then opened fire with his sub- machine gun, killing three Germans and forcing nine more to surrender. Sergeant Chilson's action not only enabled the company to cut the road but materially aided in the capture of Denshein."

Headquarters, 45th Infantry Division, General Orders No. 415 (6 December 1945).
Second Silver Star received as an oak leaf cluster for on the ribbon of the first Silver Star.

Citation:
"For heroic achievment in connection with military operations, as Platoon Sergeant, Company G, 179th Infantry Regiment, for extraordinary heroism in action on 25 April 1945, in the vicinity of Meilenhofen, Germany. When the enemy opened up with 20mm guns on the company's positions shortly after entering the town of Heilenholen, Germany, Sergeant Chilson quickly observed their positions and moved a jeep, armed with a machine gun, to the middle of the street and opened fire. In the ensuing action, he personally knocked out two flak guns, one 88mm gun, rendered another 88 useless by knocking out it's crew and killed approximately 40 enemy riflemen. When our reconnaisance troop advanced to take the town of Zell, they were halted by 20mm flak fire. Sergeant Chilson quickly mounted a motorcycle, abandoned by the enemy, and riding in front of the reconnaisance troop located six more 20mm guns. One flak gun opened fire on him from a distance of 50 yards and his motorcycle was shot from under him. He hit the dirt, rolled over, jumped to his feet, and ran directly towards the gun position and threw a grenade. This action killed three members of the enemy crew and knocked out the gun. Returning to the lead tank, he directed their fire upon the remaining five flak guns which were subsequently destroyed. Sergeant Chilson has always been an inspiration to the men of his company and is a credit to the armed forces of the United States."

Citation:
"For extraordinary heroism in action on 27 April 1945, in Neuberg,Germany. While engaged in taking the town of Neuberg, Germany, Sergeant Chilson and his platoon were halted by intense automatic weapons fire coming from a second story apartment house. Realizing that unless the enemy was knocked out immediately a large number of casualties would be inflicted upon his platoon, Sergeant Chilson, with complete disreguard for his own safety, rushed across the fire-swept street and into the house. Racing up the stairs to the second floor, he tossed a high explosive grenade into the room killing two members of the enemy machine gun crew and capturing eight. He then called his platoon forward and they occupied the building without a casualty. Later, as one of his squads was moving into the next house, they were halted by automatic rifle fire which came from a courtyard. Again Sergeant Chilson came forward, and tossing a white phosphorous grenade into the courtyard, assaulted the enemy position. Firing his carbine with his left hand after being wounded in the right arm by an enemy bullet, he killed two of the enemy and captured a third. His daring and utter disregard for his own personal safety is worthy of the highest praise and is a credit to himself and the armed forces."

Headquarters, Seventh U.S. Army, General Orders No. 60 (27 February 1946).
This award was obtained in the form of an Oak Leaf to be attached on the ribbon of the first award.

Citation:
"When the leader of the assault platoon was wounded andf put out of action during the crossing of the Rhine River, Technical Sergeant Chilson assumed command and led this platoon from it's assault on the east bank of the Rhine through the assault on Hersental, Germany. In addition to leading the unit in a conspicuously outstanding and gallant manner while it was spearhead of an important attack, he displayed great heroism in a series of actions, which proved a main factor in his company's successes and assured the advance of the assault platoon with a low rate of casualty. Technical Sergeant Chilson's exceptional leadership, courage, and exemplary soldierly conduct reflect the highest credit upon him and the armed forces of the United States."

Citation:
"For heroic achievment in connection with military operations, as Platoon Sergeant, Company G, 179th Infantry Regiment, 45th Infantry Division, on 31 March 1945. Technical Sergeant Chilson displayed exemeplary courage, boldness, and initiative in leading a five man combat patrol into Obernau Germany. Completely disreguarding his personal safety, under intense enemy small arms fire he executed his hazardous task in an outstandingly successful manner, gaining invakuable information on the enemy defensive position and eliminating the heavily defeated strongpoint in a close range fire fight, thus enabling the company to enter and clear the town with minimum of difficulty and to continue it's advance. Moreover, at the risk of his own life, he exposed himself to heavy enemy fire to rescue a wounded man of his crew. Technical Sergeant Chilson's unselfish and brave devotion to duty reflect the highest credit upon him and the armed forces of the United States."

Headquarters, 45th Infantry Division, General Orders No. 269 (27 september 1946).
Second Bronze Star received as an oak leaf cluster for on the ribbon of the first Bronze Star.

Citation:
"For gallantry in action, as Platoon Sergeant, Company G, 179th Infantry Regiment, 45th Infantry Division, on 31 March 1945. When the Platoon was moving down to Horsental, Germany, the enemy opened up with heavy fire from two flak vehicles behind the town, and at the same time, enemy riflemen and machine gunners commenced fire from positions in front of the town. Quickly grasping the situation, Technical Sergeant Chilson ran back three hundred yards, through the heavy fire, mounted the top of a tank, and rode it back to a position suitable for delivering counter-fire. Although the flak and machine gun fire was continuous, he remained in his exposed position in order to obtain maximum observation and to give detailed fire orders. Technical Sergeant Chilson's aggressive and unselfish action in the course of which six enemy soldiers were killed and seven captured, and his heroic devotion to duty were a deciding factor in the success of military operations, reflecting the highest credit upon him and the armed forces of the United States."

Headquarters, 45th Infantry Division, General Orders No. 269 (27 september 1946).
Third Silver Star received as an oak leaf cluster for on the ribbon of the first Silver Star.

Citation:
"For extraordinary heroism in action, as Platoon Sergeant, Company G, 179th Infantry Regiment, 45th Infantry Division, on 26 March 1945. During the crossing of the Rhine River near Gernsheim, Germany, Technical Sergeant Chilson distinguished himself by his coolness, bravery, and aggressiveness. When the leader of the Second Platoon, the assault platoon of the company, was wounded, he, by his own initiative, assumed command and quickly organised the platoon into a compact, efficient assault force and with vigor and keen judgement led his force along the river bank. Despite heavy and intense enemy fire of all types and all calibers, he, because of his exceptional self-sacrifice and disreguard of his personal safety, performed outstandingly intrepid actions, resulting in the death of eleven enemy soldiers and in the capture of a total of two hundred and twenty-five prisoners. In addition, Technical Sergeant Chilson personally destroyed an ammunition vehicle and two heavy machine guns and the destruction of three enemy flak vehicles. The brilliant and exemplary leadership and superior devotion to duty which characterized his accomplishments, contributed directly to the company's combat successes and reflects the highest credit upon himself and the armed forces of the United States."

Headquarters, 45th Infantry Division, General Orders No. 269 (27 september 1946).
Third DFC, received as an oak leaf cluster for on the ribbon of the first oak leaf cluster.

For action performed somewhere in the period of 11 July to 31 July 1943 in Sicily, Italy.

The exact date of action as well as the citation are unknown to us.

For wounded in action in Italy, near Carroceta, province of Latina, Lazio region on 15 February 1944.

Awarded for a wound recieved on 26th April 1945 near Neuberg,Germany.

Second Purple Heart received as an oak leaf cluster for on the ribbon of the first Purple Heart. 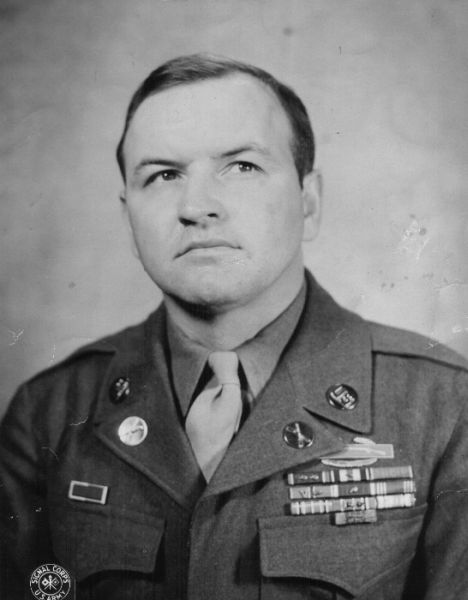