Citation:
"For meritorious conduct on 18 August, in France. While Lieutenant Conger was serving as a forward observer with an artillery their vehicle struck a mine about a mile and a half out beyond the outpost. He alone set out to find the injured men and render whatever aid necessary. Despite the dangers of enemy patrols and enemy fire, he went to the injured comrades, placed them on a medical vehicle, and removed them to the rear. The outstanding courage and loyalty to the wounded comrades displayed by Lt. Conger reflect high credit on himself and the Armed Forces."

Citation:
"For gallantry in action on 25 December 1944, in Belgium. Lieutenant Conger was adjusting artillery fire on a large column of enemy Infantry when suddenly an enemy concentration of mortar fire fell on his observation post. In spite of the extreme danger from shells wich were striking all around him, Lieutenant Conger continued to make his adjustment of fire which was so accurate that approximately two hundred and fifty of the enemy were killied and several hundred wounded and the enemy column gave up its plan of attack, withdrawing to the rear."

By direction of the President, under the provisions of AR 600-45, 22 September 1943, as amended, and under authority contained in Circular No. 32, Headquarters European Theater of Operations, United States Army, 20 March 1944, as amended, the Distinguished Service Cross is awarded to:

Second Lieutenant Alwyn D. Conger, 0-887446, Field Artillery, 113th Field Artillery Battalion, United States Army, for extraordinary heroism in connection with military operations in Germany on 26 March 1945. Lieutenant Gonger, a forward observer, moverd through enemy fire to a point where he was able to place an effective artillery concentration on enemy guns which had halted his units advance, quickly silencing them. He then advanced with assaulting infantry until he was fired on by an enemy machine gun. Crawling out, he advanced and killed the entire machine gun crew. When he was again fired on from a group of houses, he fired into the enemy positions to point out the target for a 105mm gun which soon led to the surrender of thirty-one of the enemy. The extraordinary heroism and courageous action of Lieutenant Conger reflect great credit upon himself and are in keeping with the highest traditions of the military service. Entered military service from Utah.

Award of Silver Star (Oak Leaf Cluster). Under the provisions of AR 600-45, 22 September 1943, the bronze Oak Leaf Cluster for wear with the Silver Star previously awarded, is awarded to the following officer and enlisted man:
First Lieutenant Alwyn D. Conger, 0-887446, Field Artillery, 113th Field Artillery Battalion, United States Army, for gallantry in action on 21 February 1945, in Germany. Lieutenant Conger remained at his observation post despite constant enemy shelling in an effort to locate enemy artillery positions. The information he relayed to his own unit enabled them to neutralize the enemy positions. His staunch courage and disregard for his safety reflect great upon himself and the Armed Forces. Entered military service from Washington.

Headquarters, 30th Infantry Division, General Orders No. 187 (July 14th, 1945).
This award was obtained in the form of an Oak Leave to be attached on the ribbon of the first award.

While in command of an Artillery Forward Observation Party on April 14, 1945 in the vicinity of Magdeburg, Germany, 1st Lt. Alwyn D. Conger, 0-887446, Field Artillery, 113th Field Artillery Battalion, United States Army, found that it was impossible to complete his mission adjusting preparation fires on the City of Magdeburg, from our front lines. He voluntarily proceeded to a point a mile in front of the Infantry lines and with his crew of two men, battled with a German patrol for possession of a house which would provide him with the necessary observation. After killing a number of the enemy, the patrol retired and Lt. Conger took possession of the Observation Post. In spite of continuous attempts by the enemy to dislodge him from this advantageous position, with artillery fire, mortar fire and machine guns, Lt. Conger and his crew remained at the position for three days and two nights until the attack by our Infantry brought our front lines up to his position. During these days he successfully adjusted artillery fire on strong points and fortifications in and surrounding the city of Magdeburg, causing their destruction and enabling our Infantry to more easily take the city when they attacked. Lt. Congers cool courage, technical knowledge and stubborn faithfulness to his duty were a great credit to himself and in keeping with the traditions of the military service. 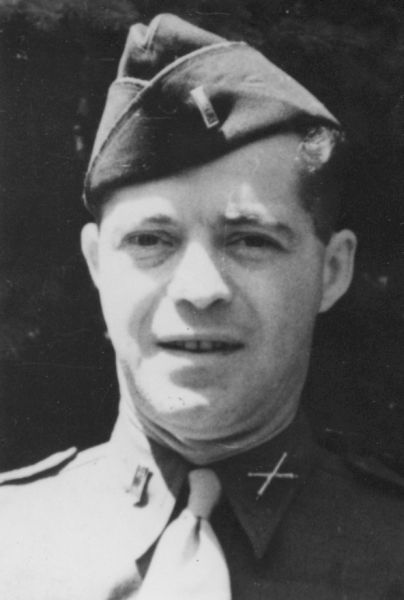