Killed in an aerial observation flight over the German lines in Italy.

"The President of the United States of America, authorized by Act of Congress, July 9, 1918, takes pleasure in presenting the Distinguished Service Cross to Captain (Infantry) Gustav J. Braun, United States Army, for extraordinary heroism in action while serving with 47th Infantry Regiment, 4th Division, A.E.F., near Sergy, France, July 29 - 30, 1918. No medical officer or first-aid man being present, Captain Braun, then first lieutenant and battalion liaison officer, established a first-aid station and worked throughout the day and night dressing the wounded. On both days he repeatedly went out himself in the most intense shell fire and carried wounded men to shelter. When the water supply was exhausted, he made several trips through heavy machine-gun fire and filled canteens at water holes and a creek in front of the line."

"Colonel (Infantry) Gustav J. Braun, United States Army, was awarded a Bronze Oak Leaf Cluster in lieu of a Second Award of the Distinguished Service Cross for extraordinary heroism in connection with military operations against an armed enemy while serving with the 133d Infantry Regiment, 34th Infantry Division, in action against enemy forces on 23 September 1944. Colonel Braun's outstanding leadership, personal bravery and zealous devotion to duty exemplify the highest traditions of the military forces of the United States and reflect great credit upon himself, the 34th Infantry Division, and the United States Army."
Headquarters, Fifth U.S. Army, General Orders No. 175
-
This award was obtained in the form of an Oak Leaf to be attached on the ribbon of the first award. 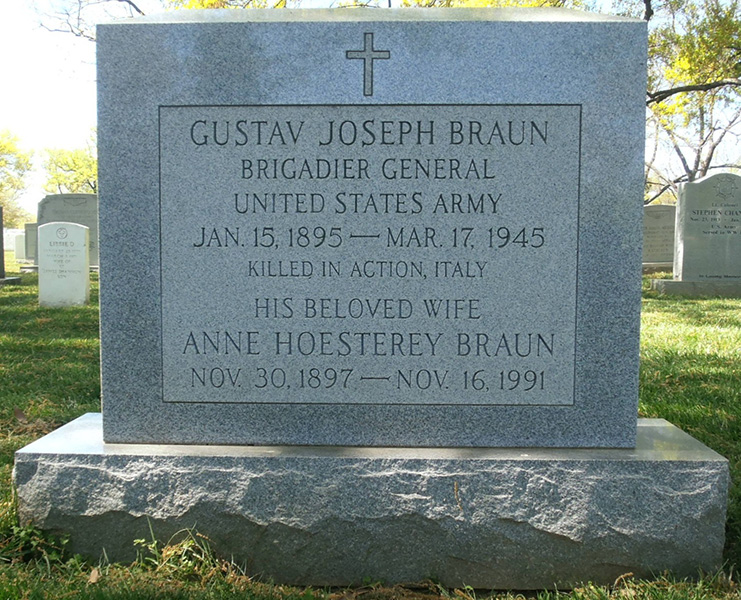