Jean Demozay was a commercial pilot before the war. In 1938 he was called up for military service but after a month he became unfit due to an accident. At the outbreak of war, he voluntarily offered his services and became an interpreter with No. 1 Squadron RAF at Reims in France.
As the Germans drew nearer, he discovered a Bristol Bombay which had been left behind and with 15 soldiers aboard, he flew the aircraft to England. He reported to the RAF and managed to convince the selection committee that he was a fighter pilot. After having completed his training he was posted to No. 1 Squadron and soon proved himself to be a very able fighter pilot, quickly claiming numerous victories.
In October 1942 he scored his 18th victory which was to be his last. In February 1943 he was sent to North-Africa to establish flight training for the Free French. In April 1944 he returned to England. After the invasion he established the "Groupe Patrie" in France. Near wars end he was named deputy commander of all French flying schools.
December 19th, while en route to London he lost his life after his plane had crashed near Buc (Yvelines).

Second DFC awarded a s a bar for on the ribbon of the first DFC.

Awarded with clasp "BATTLE OF BRITAIN". 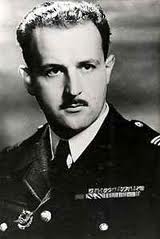