Anthony Watson served during the Second World War with No.203 Squadron (Blenheims), based in the Middle East.
On the 9th May 1941, during an attack on the Iraqi-held fort at Rutbah, another Blenheim was shot down by ground fire. Watson landed alongside, and with his crew rescued the pilot from the wreckage, although the rest of the crew were dead, and then took off under fire from the approaching armoured cars.
He finished the war with 11 confirmed victories.

Citation:
"In May, 1941, this officer was the pilot of one of two aircraft which carried out an attack on the fort at Rutbah and enemy ground forces in the neighbourhood. Both aircraft made determined attacks on the fort in the face of heavy fire from the ground which was eventually silenced. Following an attack by his fellow pilot on some armed forces behind a hill, Flying Officer Watsons attention was drawn to a column of black smoke on the ground. Although his aircraft had been hit in the petrol tank and fuselage he immediately dived towards the position and a moment later saw his fellow pilot, who had apparently been shot down, emerge from the smoke. Turning into wind and without waiting to apply the flaps Flying Officer Watson landed his aircraft less than 20 yards from the burning wreckage and, together with his air gunner and observer, rescued his comrade. In spite of fire from enemy armoured cars and bullets exploding from the burning aircraft, they attempted to find the remaining members of the crew. Failing to find any sign of them, they returned and took off with the rescued pilot. Throughout, Flying Officer Watson displayed great courage and skill as both landing and take-off were made under fire and on ground strewn with rocks and boulders."

Citation (since missing):
"One day in November 1942, this officer led a formation of aircraft on a low-level attack on the airfield at El Agheila where at least 12 enemy aircraft were destroyed on the ground and many others damaged. During a patrol the next day, a Heinkel 115 was destroyed. On the third consecutive day, the squadron was detailed to attack an airfield in Tunisia. En route, a formation of 6 S.M.82s was intercepted. In the ensuing engagement, all the enemy aircraft were shot down; Squadron Leader Watson destroyed 3 of them himself. This officer has led the squadron on shipping sweeps and convoy escorts and in numerous low-level attacks on enemy aerodromes, during which many enemy aircraft, vehicles, and E boats have been destroyed or damaged. By his high skill, courageous and inspiring leadership, Squadron Leader Watson has contributed materially to the splendid successes achieved. He has destroyed 11 enemy aircraft as well as a schooner." 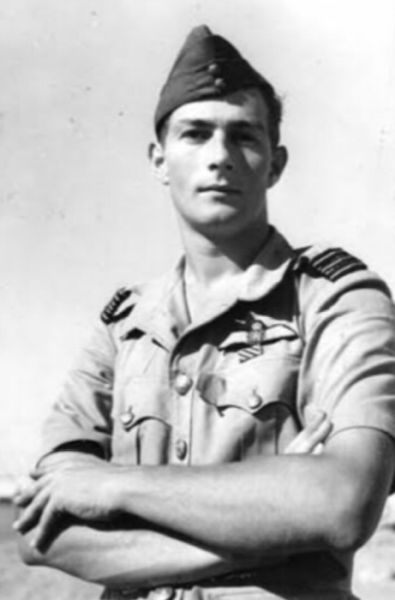