On January 29th 1856, the British Queen Victoria signed a Royal Warrant, by which a new decoration for officers and men deserving some sort of recognition was initiated. On the Queen's request the award was made retrospective to 1854. That year Great Britain became involved in a war with Russia, this conflict would be known as the Crimean War.
The Royal Decree stated that the Victoria Cross could only be awarded to those officers and men who have served in contact with the enemy and during which they have committed some significant act of bravery or devotion to their country. It is further stated that neither rank, nor duration of service, injuries, nor any other circumstance or condition, save the merit of conspicuous bravery, shall impede a valid claim to nomination for the decoration. For subsequent acts of gallantry, a bar can be awarded.
Since 1856, the Victoria Cross has been the most highly valued gallantry award that can be awarded to British and Commonwealth forces.
Contrary to common belief, the Victoria Cross is not made from the bronze from Russian cannons that were captured at Sebastopol during the Crimean war but from Chinese cannons captured from the Russians. The decoration is in the form of a Maltese Cross ensigned with a lion upon the Royal Crown. On the front of the decoration the text "For Valour" is engraved; on the reverse side some details about the Victoria Cross recipient are mentioned, such as name, rank, unit and the date on which the decoration was earned.
The ribbon is 1.25" wide with a miniature VC in its centre. Originally it was dark blue for the Royal Navy and crimson for the Army. A Royal Decree dated May 22nd 1920 and signed by Winston Churchill, authorized that the Crimson ribbon should be adopted by all services of the British and Commonwealth forces.

Some facts about the VC
Ever since 1856, each Victoria Cross is handmade by the London jewelry firm of Hancocks and therefore each decoration is a unique specimen.
Just over two thirds of all Victoria Crosses have been presented by the reigning monarch or the heir apparent.
Since its institution, the Victoria Cross has been presented 1356 times. The first recipient was C.D. Lucas for his heroic actions in the Baltic Sea, June 21st 1854. The first presentation of the Victoria Cross took place in Hyde Park on Jun 26th 1857 when Queen Victoria decorated 62 officers and men for their heroic actions during the Crimean War.
Only three men have received the Victoria Cross twice. These are Arthur Martin-Leake, Noel Chavasse and Charles Upham.
In three instances the VC has been bestowed upon father and son. In 1858, during the Indian Mutiny, Lieutenant (later Field-Marshal) Earl Roberts of the Bengal Artillery was awarded the decoration. His son, the Hon. F.H.S. Roberts of the King's Royal Rifle Corps earned his VC in the South African War at the battle of Colenso, Natal on December 15th, 1899. In the same war and on the same day, Captain W.N. Congreve was awarded the VC and his son, W. la T. Congreve earned his for bravery in France between July 6th and 20th 1916. Major C.J.S. Gough of the 5th Bengal European Cavalry was granted the Cross on four occasions between August 1857 and February 1858 during the Indian Mutiny. His son, Major J.E. Gough earned his for gallantry in Somaliland on April 22nd, 1903.
In four cases, the VC has been bestowed upon brothers. Major C.J.S. Gough, already mentioned and his brother, Lieutenant H.H. Gough of the 1st Bengal European Light Cavalry in November 1847 and February 1858 during the Indian Mutiny. Major R.W. Sartorius, 6th Bengal Cavalry, Ashanti 1874 and his brother, Captain E.H. Sartorius, 59th Foot, Afghanistan 1874. 2nd. Lieut. A.B. Turner, Berkshire Regt, France 1915 and his brother Major V.B. Turner, Rifle Brigade, Western Desert 1942. Lieut. R.B. Bradford, Durham Light Infantry earned his VC at Eaucourt l'Abbaye, France, October 1st 1916 and his brother, Lieutenant-Commander G.N. Bradford, RN of HMS Iris for an operation in Zeebrugge, Belgium on April 23rd, 1918.
During the Second World War the Victoria Cross was awarded 182 times, Charles Upham of the New Zealand Military Forces received his VC for bravery in Crete between May 22nd and 30th, 1941 and a bar for gallantry in the Western Desert July 14th, 1942. For actions during Operation Overlord, the Normandy landings on June 6th 1944, only one Victoria Cross was awarded, this went to Stanley Hollis, a member of the Green Howards.
Since 1907 the Victoria Cross can also be awarded posthumously and until 1977 this was the only British decoration that could be awarded in this manner.
The largest number of Victoria Crosses won in a single day was on November 16th 1857 during the Indian Mutiny. On this day 23 persons were nominated for awarding for actions at Lucknow and one at Narnoul, south west of Delhi.
The largest number of Victoria Crosses won in a single action was on January 22nd 1879 at Rorkes Drift during the Zulu War. Following this action, 11 men were awarded the VC.
Twenty-seven men of non-British nationality have received the Victoria Cross. These were five Americans, one Belgian, three Danes, two Germans, one Swede, a Swiss and a Ukranian. Plus 13 Gurkhas from Nepal. Nepal has never been part of the British Empire or Commonwealth.
The Royal Artillery is the corps that has won the highest number of Victoria Crosses since its institution. This unit has won the Victoria Cross 51 times, the Royal Engineers have won the Victoria Cross 41 times and the Royal Army Medical Corps which won the Victoria Cross 27 times. Also with the Rifle Brigade, 27 men received the VC. 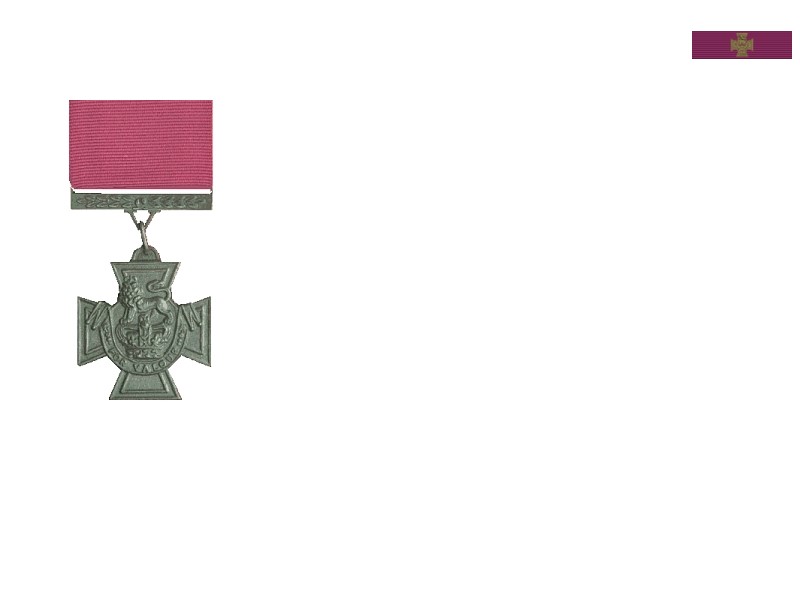