The Canadian Forces Decoration was instituted December 15th, 1949 as a replacement of all previous awards for long and loyal service with Canadian units after September 1st, 1939. The first medal was presented on September 1st, 1951.
The decoration was awarded to all members of the Candian Forces having served for a period of 12 years. To be eligible, the last eight years of service should have been impeccable. Also eligible were officers and ranks of both regular and reserve units.
Persons having served with other than Canadian British Commonwealth Forces were also eligible provided they had served with Canadian Forces during the last five years and had received no other awards.
For an additional 10 years of loyal service, a clasp could be awarded. The gold-plated clasp measures 6 mm or .23" in height; the center depicts the coat of arms of the Canadian Army surmounted by a crown.

The medal itself is in a decagonal form. There are two versions; the King George VI is made of gold-plated silver while the Queen Elizabeth II is made of a cupro-nickel alloy. Both versions are gold-plated. The obverse depicts an effigy of the uncrowned monarch, George VI facing left and Queen Elizabeth II facing right. The effigy is surrounded by the inscription "GEORGIVS VI D : G : BRITT : OMN : REX FID : DEF" or "ELIZABETH II DEI  GRATIA REGINA  CANADA" respectively. The reverse depicts a crown, three Maple Leaves and an eagle symbolizing the Navy, Army and Air Force respectively. The word "SERVICE" is engraved on a ribbon at the base and a "fleur-de-lis" is depicted on either side of the crown. On the King George version, the Royal Cypher is depicted in the center but it is lacking on the Queen Elizabeth version.
The King George has a buckle with the word CANADA at the base of the ribbon which itself is attached to the medal by metal arms. This proved to be a weak point however, therefore the ribbon is attached directly to the metal arms on the Queen Elizabeth.
The ribbon is coloured red and measures 39 mm or 1.53" in width with three narrow silver-coloured vertical stripes. A rosette was attached to the ribbon for an additional 10 years of service. 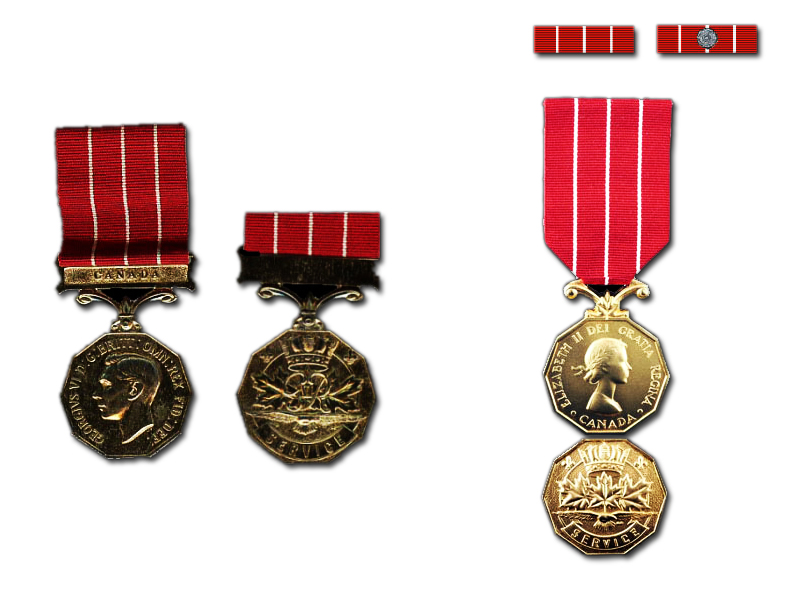