The Air Force Cross was established on June 3rd, 1918, the birthday of King George V, and is awarded to officers and warrant officers of the RAF for an act of valour and courage or devotion to duty performed whilst flying, though not in active operations against the enemy. It may also be granted to individuals not belonging to the RAF for having rendered distinguished services to aviation in actual flying. Since the 1993 review of gallantry awards it is now available for all ranks of the RAF services. A bar is awarded for an additional act which would have warranted the AFC. The bar has an eagle in the centre and the year of the award is engraved on the reverse.
The Air Force Cross is silver and consists of a thunderbolt in the form of a cross, the arms conjoined by the wings, the base bar terminating with a bomb surmounted by another cross composed of aeroplane propellor blades, with the end of the four blades enscribed with the Royal Cypher G (top), R (left), VI (bottom) and I (Right). The top arm is ensigned by a crown. In the centre of the obverse is a roundel displaying Hermes, mounted on a hawk in flight, bestowing a wreath. On the reverse of the award, within a central circle, the Royal Cypher GV, GVI, EIIR are engraved, above the date 1918, the year when the award was instituted. The AFC is issued unnamed.
The ribbon is 1.25 inches wide and consists of alternating red and white stripes (0.125 inches) leaning to the left at 45 degrees. Until 1919, the stripes were horizontal.
In February 1970, the AFC was awarded to a naval officer for the first time. 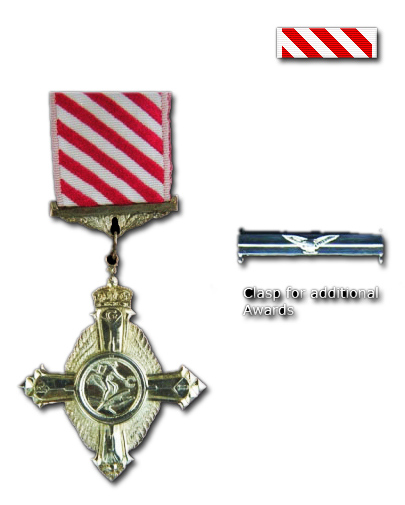