"For extraordinary heroism and distinguished service in the line of this profession as Commanding Officer of the Destroyer U.S.S. LAFFEY (DD-459), in action against enemy Japanese forces off Okinawa, on 16 April 1945. With his ship under savage attack by thirty hostile planes, Commander Becton skillfully countered the fanatical enemy tactics, employing every conceivable maneuver and directing all his guns in an intense and unrelenting barrage of fire to protect his ship against the terrific onslaught. Crashed by six of the overwhelming aerial force which penetrated the deadly anti-aircraft defense, the U.S.S. LAFFEY, under his valiant command fought fiercely for over two hours against the attackers, blasting eight of the enemy out of the sky. Although the explosions of the suicide planes and two additional bombs caused severe structural damage, loss of armament and heavy personnel casualties, Commander Becton retained complete control of his ship, coolly directing emergency repairs in the midst of furious combat, and emerged at the close of the action with his gallant warship afloat and still an effective fighting unit. His unremitting tenacity of purpose, courageous leadership and heroic devotion to duty under fire were inspiring to those who served with him and enhanced the highest traditions of the United States Naval Service."

"For conspicuous gallantry and intrepidity as Operations Officer on the Staff of Commander, Destroyer Squadron TWENTY-ONE (DesRon 21), on the Flagship U.S.S. NICHOLAS (DD-449), in night engagements with enemy surface forces in the Solomon Islands Area, from 5 to 13 July and on 17 - 18 August 1943. With complete understanding of objectives and tactics, Commander Becton expertly assisted and advised his Squadron Commander in controlling and coordinating the attacks of the vanguard destroyers of a cruiser-destroyer force in which several enemy ships were sunk and many damaged. In a subsequent skillfully planned assault, his Flagship led a destroyer division against an attacking force and by combined gun and torpedo fire, caused the destruction of two destroyers, severe damage to a third and the annihilation of a number of landing barges. Commander Becton's outstanding skill and courageous devotion to duty were in keeping with the highest traditions of the United States Naval Service."
Commander, Southern Pacific, Serial 002122

"For conspicuous gallantry and intrepidity as Commanding Officer of the Destroyer U.S.S. LAFFEY (DD-459), attached to Destroyer Squadron SIXTY (DesRon 60), in action against enemy forces during the amphibious assault on Normandy France, June 1944, and during the bombardment of enemy defenses at Cherbourg, France, on 25 June 1944. Maneuvering his ship through heavily mined waters and under heavy and accurate gunfire from enemy shore batteries, Commander Becton protected vessels in the Western Task Force Area from enemy surface forces and submarines and, although the LAFFEY suffered light damage from enemy gunfire, interposed himself between shore batteries and other units of one bombardment group to divert the fire and, maintaining continuous fire on the enemy batteries, covered the retirement of the minesweepers and battleships. Subjected to heavy enemy fire in later actions, he skillfully maneuvered his ship to make possible the retirement of battleships out of range of the enemy batteries. His courage and devotion to duty were in keeping with the highest traditions of the United States Naval Service."
Commander, 12th Fleet, Serial 10564 (Gold Star in lieu)

"For conspicuous gallantry and intrepidity as Commanding Officer of the Destroyer U.S.S. LAFFEY (DD-459), during action against enemy Japanese forces at Ormoc Bay, Leyte, Philippine Islands, on 7 December 1944. Fighting hostile shore batteries and constant attack by enemy aircraft, Commander Becton boldly directed the LAFFEY's accurate, determined gunfire against the heavily fortified hostile shores to neutralize Japanese defenses and pave the way for our assaulting troops. With a strong force of enemy aircraft attempting to bomb and crash our ships during retirement, he brought his powerful anti-aircraft guns to bear with deadly accuracy, thereby providing an effective screen for the convoy and insuring a safe withdrawal. By his superb ship-handling, inspiring leadership and cool courage maintained in the face of tremendous odds, Commander Becton contributed materially to the infliction of extensive and costly damage on the enemy and to the success of our forces in recapturing this vital hostile stronghold. His zealous devotion to the completion of a decisive engagement reflects the highest credit upon himself, his intrepid command and the United States Naval Service."
Commander, 7th Fleet, Serial 03024 (2nd Gold Star in lieu)

"For conspicuous gallantry and intrepidity as Commanding Officer of the Destroyer U.S.S. LAFFEY (DD-459), during action against enemy Japanese forces in the Philippine Islands Area in January 1945. Boldly penetrating dangerous restricted waters of Lingayen Gulf during the initial bombardment and assault at Luzon, Commander Becton fought his ship gallantly despite persistent attacks by hostile aircraft and devastating fire directed from Japanese shore batteries, successfully carrying out extensive anti-aircraft screening missions, and bombardment of heavily fortified positions on the beach and providing effective fire support for underwater demolition units. By his expert ship-handling, brilliant leadership and zealous devotion to duty in the face of grave peril, Commander Becton contributed materially to the success of our forces in recapturing the Philippines and upheld the highest traditions of the United States Naval Service."
3rd Gold Star in lieu 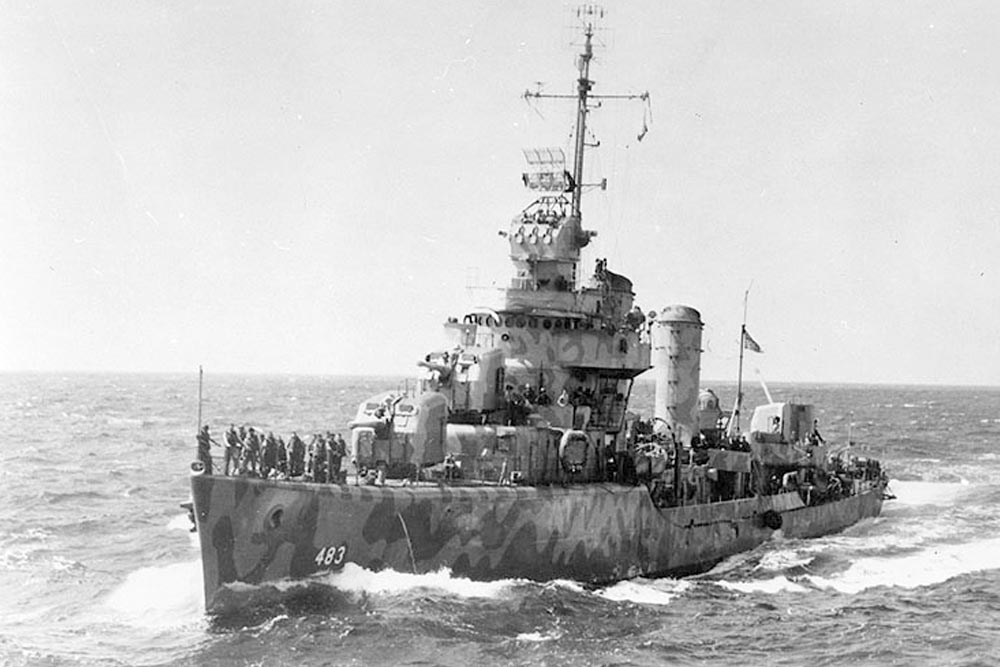