Citation:
"For extraordinary heroism and distinguished service in the line of his profession as Commander of Destroyer Squadron TWENTY-THREE (DesSq-23), operating in the Northern Solomon Islands area during the period from midnight 30 October to noon 2 November 1943. Proceeding through unfamiliar and poorly charted waters, Commodore Burke, under terrific fire from hostile shore batteries and aerial attacks, participated in the initial bombardment of Buka-Bonis and the first daylight assault on Shortland-Faisi-Ballale. Against a Japanese Task Force of superior fire power, he fought his squadron with superb skill in a victorious engagement which resulted in the sinking of five enemy warships and the damaging of four. Later, when sixty-seven hostile bombers launched a deadly attack against his Task Force, Commodore Burke kept up a vigorous barrage of anti-aircraft fire which assisted in shooting down seventeen Japanese planes and driving off the others. His aggressive leadership and gallant conduct under fire contributed to the protection of our beachhead at Empress Augusta Bay and to the successful establishment of our land and air forces on the Bougainville Islands. His actions at all times were in keeping with the highest traditions of the United States Naval Service."
Commander South Pacific: Serial 00162 (January 14, 1944).

Citation:
"For exceptionally meritorious service to the Government of the United States in a duty of great responsibility as Commanding Officer of a Destroyer Division and subsequently a Destroyer Squadron operating against enemy Japanese forces in the South Pacific Area from early February to December 1, 1943. Throughout this period, Captain Burke led his forces in many offensive operations. His indomitable fighting spirit and great personal courage contributed directly to the success of our forces in that area and were in keeping with the highest traditions of the United States Naval Service."

Citation:
"For exceptionally meritorious service to the Government of the United States in a duty of great responsibility as Chief of Staff to Commander, Fast Carrier Task Force, Pacific, during action against enemy Japanese forces in the Pacific War area from 15 December 1944 to 15 May 1945. Highly skilled in the planning and conduct of a prolonged series of operations in support of our assault and seizure of vital Japanese bases in the Pacific, Commodore Burke was in large measure responsible for the efficient control under combat conditions of the tactical disposition, the operation, the security and the explosive offensive power of his Task Force in its hold and determined execution of measures designed to force the capitulation of the Japanese Empire. Despite incessant attacks by overwhelming forces of hostile suicide boats and aircraft, he carried out all duties of his vast assignment with fine initiative and ability throughout the seizure of bases at Iwo Jima and Okinawa, including two carrier strikes on Tokyo, a carrier strike on the Kure Naval Base and an engagement with the Japanese Fleet on 7 April, in which several hostile men-o-'war were destroyed by our aircraft. On two occasions when the Flagship was damaged by enemy action, he directed the transfer of surviving staff personnel and ship records to another ship with a minimum of interruption to tactical command. His brilliant leadership, sound judgment and cool courage in the face of enemy fire were essential factors in the successful prosecution of the war, and his valiant devotion to duty throughout reflects the highest credit upon Commodore Burke, his command and the United States Naval Service."
Commander Fast Carrier Task Force Pacific: Serial 0553 (May 30, 1945).
This award was obtained in the form of an Gold Star to be attached on the ribbon of the first award.

Citation:
"For conspicuous gallantry and intrepidity as Chief of Staff to Commander, Fast Carrier Task Force, in action against enemy Japanese forces in the Pacific War Area, on 11 May 1945. When the Flagship on which he was embarked was hit by two enemy suicide dive bombers, Commodore Burke proceeded to a compartment in which personnel were trapped by fire and heavy smoke, and succeeded in evacuating all hands. When the Flagship to which he had removed his staff was in turn hit by a suicide plane on 14 May, he against arranged for the transfer of his command to a new ship. In spite of all the difficulties, Commodore Burke maintained tactical control of the Task Force throughout, thereby contributing materially to the success of the operations and reflecting great credit upon himself and the United States Naval Service."
Commander Fast Carrier Task Force Pacific: Serial 0503 (May 30, 1945).

Citation:
"For exceptionally meritorious conduct in the performance of outstanding services to the Government of the United States as Commander Destroyer Squadron Twenty-three, during the first anti-shipping sweep northwest of the Bismarck Archipelago, and the first bombardment of enemy shore installations at Kavieng, New Ireland and on the Duke of York Island, between 17 and 23 February 1944. During this period the squadron under Captain Burke's command destroyed two enemy naval auxiliary vessels, one large enemy cargo ship, one mine layer, four barges, and inflicted heavy damage on enemy shore installations. Although subjected to Japanese aerial attack and intense artillery fire from enemy shore batteries, Captain Burke successfully carried out his aggressive and determined attack without damage to the ships of his squadron. Through his skillful leadership, tactical ability and determined fighting spirit, he contributed materially to the destruction of enemy naval units and the success of operations in the above area. His conduct throughout was in keeping with the highest traditions of the United States Naval Service."
With Combat "V" to be attached on the ribbon of the award.

For wounds received while serving on board the USS Conway during July 1943.

Citation:
"For exceptionally meritorious conduct in the performance of outstanding services to the Government of the United States as Chief of Staff to Commander, Carrier Task Force, Pacific Fleet, from 27 March to 30 October 1944. In the planning and execution of a long series of successful offensive operations in support of the reduction of the outer perimeter of Japanese defenses in New Guinea, the Carolines, the Marianas, the Halmaheras, and the Philippine Islands, and which included air attacks in strength against Truk, Ponape, the Bonis, the Nansei Shoto and Formosa as well as in the target areas, he consistently demonstrated the highest qualities of leadership, courage and professional skill. His sound judgment, great energy, and coolness of decision under the difficult and uncertain conditions of combat were outstanding, and at all times he displayed an inspiring ability to appreciate and seize opportunities to inflict damage upon the enemy, which was thoroughly in keeping with the highest traditions of the Naval Service."
This award was obtained in the form of an Gold Star to be attached on the ribbon of the first award.

Awarded after Letter of Commendation.

Citation:
"For exceptionally meritorious conduct in the performance of outstanding services to the Government of the United States as Deputy Chief of Staff to Commander Naval Forces, Far East, from 3 September 1950 to 1 January 1951. Bringing a sound knowledge of Naval administration and professional skill to his assigned task, Rear Admiral Burke reorganized the rapidly expanded Staff to meet its ever increasing responsibilities and, through his unusually fine conception of the essentials of modern warfare, materially improved the mutual functioning of the Operations, plans and Intelligence Sections of the Staff. Working tirelessly for long hours, he kept Commander Naval Forces, Far East, constantly informed of the war effort and maintained the closest liaison and understanding with the Staff of the Commander-in-Chief, Far East, to keep its personnel aware of the Naval aspects of the campaign. By his judgment, outstanding ability and devotion to duty, Rear Admiral Burke contributed immeasurably to the success of Naval operations in the Korean theater, thereby upholding the highest traditions of the United States Naval Service."
Third Legion of Merit received in the form of a second gold star to be worn on the ribbon of the first Legion of Merit.

Citation:
"For exceptionally meritorious conduct in the performance of outstanding services to the Government of the United States as a delegate with the United Nations Command delegation, United Nations Command (Advance), in Korea, from 9 July to 5 December 1951. Admiral Burke's keen discernment and decisive judgment were of inestimable value in countering enemy intransigence, misrepresentation and evasion with reasoned negotiation, demonstrable truth and conciliatory measures. As advisor to the Chief Delegate on all phases of the armistice conferences, he proffered timely recommendations for solution of the varied, intricate problems encountered. Through skillful assessment of enemy capabilities, dispositions and vulnerabilities and brilliant guidance of supporting staff officers, Admiral Burke significantly furthered progression toward success of the United Nations' first armed bid for world peace. Admiral Burke's exemplary achievements reflect great credit upon himself and the military service."
Fourth Legion of Merit received in the form of bronze oak leaf cluster (U.S. Army awarding) to be worn on the ribbon of the first Legion of Merit.

Third Distinguished Service Medal received in the form of a second gold star to be worn on the ribbon of the first DSM. 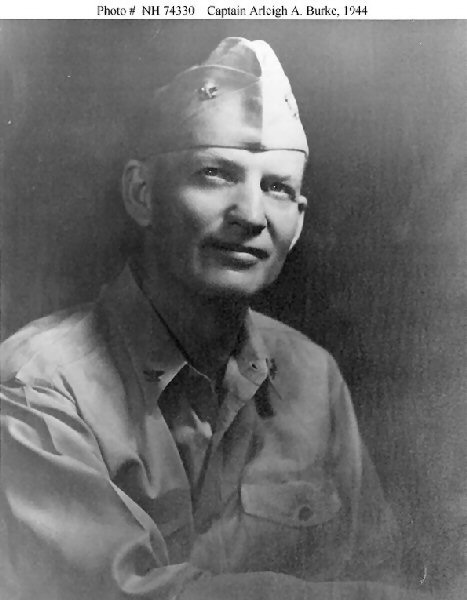