Born in 1914 above Hornsey police station, Gatwards father was Chief Inspector of police. He attended St George's College in Palmers Green, and later became a journalist before joining the wallpaper manufacturers Colorall. He joined the RAF Volunteer Reserve in 1937.
At the outbreak of war in 1939 Gatward was a sergeant pilot and was commissioned on 27 July 1940 and flew Bristol Blenheims with No 53 Squadron on low level raids. Converting to Bristol Beaufighters in 1941 he flew with No 236 Squadron.
Following his audacious daylight raid in Paris for which he was awarded his first DFC, Gatward was he was appointed the personal assistant to Lt Gen Noel Mason-Macfarlane, the Governor of Gibraltar.
Returning to active in June 1943, Gatward became a Flight Commander with No 404 Royal Canadian Air Force squadron, operating from Wick. Following the loss of the squadron's commanding officer in March 1944, Gatward took over command. Gatward ended the war in command of No 157 Wing.
Remaining in the RAF, Gatward became the liaison officer with the USAF in Germany in 1946. In 1955 he took command of RAF Odiham and later served with Supreme Headquarters Allied Powers Europe. After serving 30 years in the RAF he retired on 3 September 1964 with the rank of Group Captain at the Air Cadet Headquarters at White Waltham.

Article taken from FlightGlobal Magazine June 25th, 1942:
Fit. Lt. A. K. Gatward and Sergt. Fern flew a Coastal Beaufighter low ever the roof-tops of Paris in broad daylight, and dropped Tricolour flags on the Arc de Triomph and the former Ministry of Marine, now used as the German headquarters in Paris. They made two circuits, and the first time they attracted little attention, but when they went round again the Parisians tumbled to what was talcing place. So did the Germans, and some of their officers were seen dodging about in the search for cover. But the only shots which the British airmen dared to fire were shells
from their four cannons into the German headquarters building. It is to
be hoped that they at the very least upset some nice, tidy, important files.

recommendation:
(drafted 26 March 1944 when he had flown 91 sorties/380 operational hours)

"A remarkable operational record for a crew engaged in a fleeting opportunity role. While on the strength of this unit, this officer has completed 28 sorties and a total of 130 flying hours over a period of nine months, nine of these sorties having been completed in a period of one month. In addition to the inconsistent and therefore strenuous and exacting nature of these operations, leading a strike formation on anti-shipping operations on the Norwegian coast demands the highest calibre of airmanship which has been exemplified by this officer's work. His brilliant leadership has inspired confidence in his crews on nine successful anti-shipping engagements resulting in serious losses to the enemy. On March 23rd, leading a strike formation of twelve aircraft, this officer sighted an enemy convoy and developed the attack with such great resolution that he fired the main weapons at point-blank range, thus registering a maximum number of hits.

The Officer Commanding, RAF Station Wick, added his comments on 23 April 1944; in the month past he had been promoted to Wing Commander:

Wing Commander Gatward is in all respects an outstanding leader both in the air and on the ground. On operations he has consistently displayed intrepidity and steadfastness of purpose in the performance of his allotted task, persistence and élan in pressing home an attack and has inspired his strike forces with the confidence which is borne of the knowledge that they are being well led. On the ground, he had been indefatigable in fostering esprit de corps and maintaining a good fighting spirit and enthusiasm amongst his crews. The fact that he has deservedly won the unstinted appraisal [sic - approval] of the Royal Canadian Air Force squadron which he now commands is in itself significant. I concur in the assessments of the late Squadron Commander and strongly recommend him for the award of the Distinguished Service Order.

Citation:
"This officer has led the squadron with great skill and gallantry in many sorties. In July 1944 he participated in an operation which resulted in the destruction of an enemy convoy, comprising three medium sized merchant vessels and six escorting ships. In August 1944, Wing Commander Gatward led his squadron in an attack on a target in the Gironde area. During the operation his aircraft was repeatedly hit by anti-aircraft fire and sustained serious damage. Nevertheless he flew safely to base in the face of great difficulty. This officer has displayed leadership of the highest order." 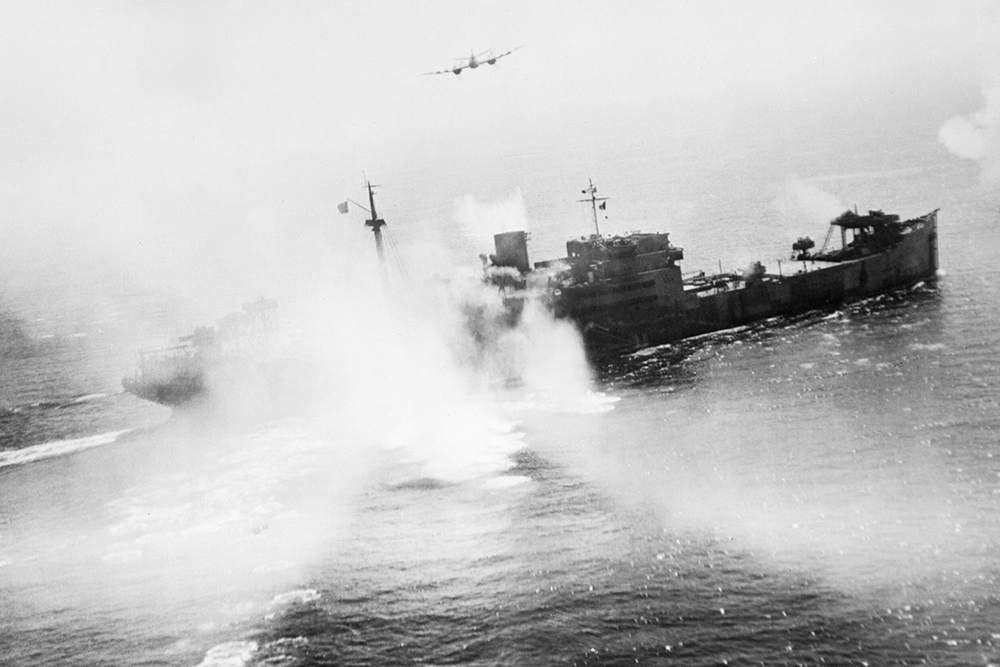