Colin McVean Gubbins grew up in Japan where his father worked in the British consular service. After being sent back to England and educated at Cheltenham College, at the age of 19 Gubbins entered the Royal Military Academy at Woolwich. Gubbins served throughout the Great War with the Royal Artillery gaining the Military Cross while serving on the Western Front and getting wounded.In 1919 Gubbins went to Russia where he served under General Edmund Ironside and General Anton Denikin in the White Army. He also served in the Anglo-Irish war of 1919-21. His experiences in Russia and Ireland gave him clear insights into the nature of guerrilla warfare. He joined Military Intelligence and wrote a series of pamphlets on the subject including "The Art of Guerrilla Warfare", "Partisan Leader's Handbook" and "How to Use High Explosives".

After the fall of Poland in September 1939 he was head of Military Intelligence mission to Poles and Czechs in Paris, France. In 1940 he moved to Norway to command the Independent Companies (forerunners of the Commandos), also under MI(R) auspices. For this he was awarded the DSO.
In November 1940 Gubbins was seconded to the Special Operations Executive (SOE), which had recently been established. Besides maintaining his existing connections with the Poles and Czechs, Gubbins was given three tasks: to set up training facilities; to devise operating procedures acceptable to the Admiralty and Air Ministry; and to establish close working relations with the Joint Planning Staff. As head of SOE, Gubbins co-ordinated the activities of resistance movements worldwide. Gubbins' role involved consultation at the highest level with the Foreign Office, the Chiefs of Staff, representatives of the resistance organizations, governments-in-exile, and other Allied agencies including particularly the US Office of Strategic Services (OSS).

In 1946, when the Special Operations Executive had been disbanded, the War Office had no suitable work for him. He became Managing Director of a Scottish carpet company, Grays at Newton of Ayr close to Prestwick Airport. Gubbins spent his last years at his home in the Hebrides, on the Isle of Harris. He was appointed Deputy Lieutenant of the islands area of the Western Isles in 1976.

Citation:
"For conspicuous gallantry. When one of his guns and its detachment were blown up by a heavy shell, he organised a rescue party and personally helped to dig out the wounded while shells were falling all round."

Citation (general):
"For gallant and distinguished services in action in connection with recent operations in Norway."
From 6.5.40 to 23.5.40, Col Gubbins commanded the five Independant Coys in the neighbourhood of BODO.
Later, commencing on 23.5.40, th 24 Gds Bde was placed under his command.
And during the period of the operations displayed sterling qualities of leadership in the handling of his troops operating in a strange and difficult type of country. On several occasions he prsonally led troops which were fighting a rearguard action in contact with the enemy.
His courageous example of devotion to duty though greatly overworked was an inspiration to his men.
The safe withdrawal of the forces from BODO in the face of the enemy and under constant air attack was due to his inspiring leadership, courage and devotion.

Companion of the Order of St Michael and St George (CMG)

For exceptional services rendered during the operations involved in the Liberation of France.
WO/373/185

For having contributed to the Dutch cause in various functions during the war.
Royal Decree no. 34 dated February 13th, 1947. 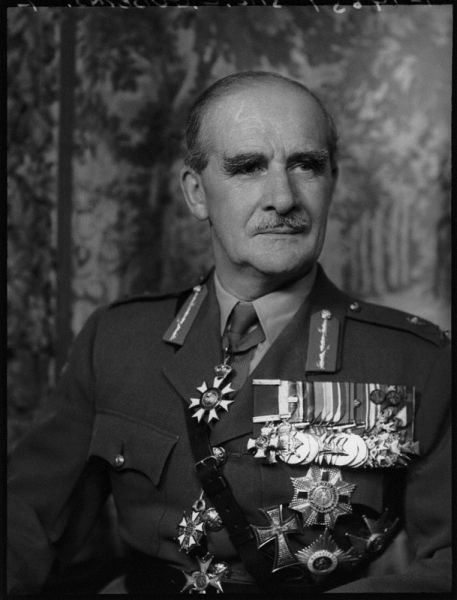