"For conspicuous gallantry and intrepidity in the line of his profession as Commanding Officer of the U.S.S. GUNNEL (SS-253), during the SECOND War Patrol of that Submarine in enemy controlled waters from 28 May 1943 to 3 July 1943. By his coolness under fire, his skillful handling of his ship and his courage, he succeeded in sinking an important amount of enemy shipping including one enemy destroyer. His conduct was in keeping with the highest traditions of the United States Naval Service."

"For exceptionally meritorious conduct in the performance of outstanding services to the Government of the United States as Commander in Chief, United States Naval Forces, Europe, from April 1967 to July 1968. Responsible for maintaining the United States Naval Forces in the European area at a high state of readiness, Admiral McCain anticipated U.S. requirements and prepared his command with great professional skill for contingency operations during the Middle East crisis, resulting in the strategic location of surface, air, and amphibious forces in the Eastern Mediterranean for the most effective utilization in any contingency. The clarity, forcefulness, and wisdom of his guidance to subordinate commanders during the Arab-Israeli War, the U.S.S. LIBERTY incident, and the Cyprus crisis of 1967 ensured alert and prepared forces promptly deployed in a maximum state of combat readiness, and thereby contributed significantly to a decrease in international tension in each instance. Throughout his tenure in command, Admiral McCain took innovative and sound measures to increase the readiness of naval forces. By his efforts, the SIXTH Fleet was provided the guidance and organizational assistance to make it an effective and ready force for peace. Through his astute and brilliant leadership and inspiring devotion to duty, Admiral McCain rendered valuable and distinguished service in the European area during this critical period of crisis, and upheld the highest traditions of the United States Naval Service."

For successfully commanding Operation Steel Pike exercise off the coast of Spain.

"For exceptionally meritorious conduct in the performance of outstanding services to the Government of the United States during the period July 1965 to April 1967 as Vice Chairman, U.S. Delegation, United Nations Military Staff Committee and Commander, Eastern Sea Frontier."

"During his one patrol with submarine Dentuda, he damaged a large freighter and sank two guardboat-style patrol craft in the East China Sea and the Taiwan Straits."

"His zeal in the investigation and development of new submarine tactics and weapons has been outstanding." 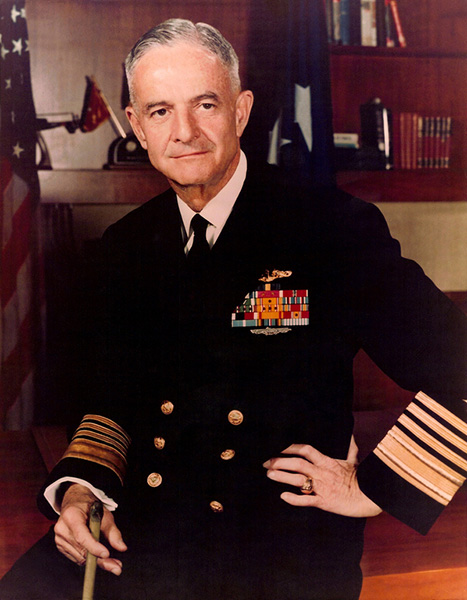