"For extraordinary heroism in connection with military operations against an armed enemy on 18 September 1944 in Holland. With great courage, intrepidity, and on his own initiative, Sergeant Funk led a three-men patrol against a German flak battery of three 20-mm guns which were firing on American gliders then circling to land. He drove off all enemy security around the guns and led an assault which killed approximately twenty members of the crews and inflicted other casualties. The flak guns were silenced before effective fire could be placed upon the aircraft, due to the courageous and heroic actions of Sergeant Funk. The courageous action of Sergeant Funk contributed, in large part, to the prompt seizure of his company objective, and assisted in driving the enemy from the landing zone. His initiative, outstanding bravery, and strong personal leadership, despite overwhelming enemy superiority in both numbers and firepower, enabled him to render a distinguished service in the destruction of enemy resistance. His conduct reflects the highest traditions of the Army of the United States. Entered military service from Pennsylvania."

"For gallantry in action from 6 to 17 June 1944, in Normandy, France. First Sergeant Funk, Company C, 1st Battalion, 508th Parachute Infantry Regiment, 82d Airborne Division, after the Normandy jump, though suffering from a badly sprained ankle, gathered a group of eighteen men and set a route of march which he believed would lead the group to friendly lines. With unerring accuracy he led this group across twenty miles of enemy infested territory. During the major portion of the journey he acted as lead scout, refusing to jeopardize the safety of his men after three scouts had been lost. The group traveled by night and after numerous encounters with enemy groups, First Sergeant Funk led them through the MLR to the security of our forces. First Sergeant Funk's courage and determination was responsible for the group's safe return, and reflects great credit upon himself."

"He distinguished himself by gallant, intrepid actions against the enemy. After advancing 15 miles in a driving snowstorm, the American force prepared to attack through waist-deep drifts. The company executive officer became a casualty, and 1st Sgt. Funk immediately assumed his duties, forming headquarters soldiers into a combat unit for an assault in the face of direct artillery shelling and harassing fire from the right flank. Under his skillful and courageous leadership, this miscellaneous group and the 3d Platoon attacked 15 houses, cleared them, and took 30 prisoners without suffering a casualty. The fierce drive of Company C quickly overran Holzheim, netting some 80 prisoners, who were placed under a 4-man guard, all that could be spared, while the rest of the understrength unit went about mopping up isolated points of resistance. An enemy patrol, by means of a ruse, succeeded in capturing the guards and freeing the prisoners, and had begun preparations to attack Company C from the rear when 1st Sgt. Funk walked around the building and into their midst. He was ordered to surrender by a German officer who pushed a machine pistol into his stomach. Although overwhelmingly outnumbered and facing almost certain death, 1st Sgt. Funk, pretending to comply with the order, began slowly to unsling his submachine gun from his shoulder and then, with lightning motion, brought the muzzle into line and riddled the German officer. He turned upon the other Germans, firing and shouting to the other Americans to seize the enemy's weapons. In the ensuing fight 21 Germans were killed, many wounded, and the remainder captured. 1st Sgt. Funk's bold action and heroic disregard for his own safety were directly responsible for the recapture of a vastly superior enemy force, which, if allowed to remain free, could have taken the widespread units of Company C by surprise and endangered the entire attack plan." 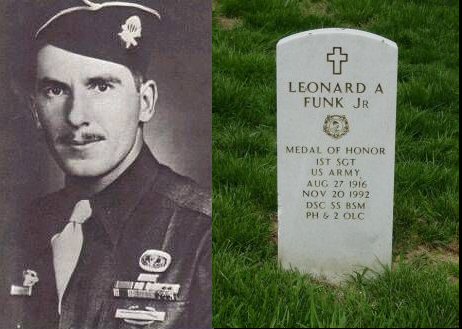