Citation:
"For extraordinary heroism and distinguished service in the line of this profession as Commanding Officer of the Destroyer U.S.S. GRAYSON (DD-435), during the Battle of Ontong, Java, against enemy Japanese forces on 24 August 1942. When his ship was subjected to repeated bombing and strafing attacks by enemy dive bombers at very close range, Commander Bell conned his vessel and directed the fire of his battery with outstanding efficiency, destroying at least two Japanese dive bombers and damaging others. Immediately following the engagement and during the night, he conducted a search for lost planes, taking his ship into enemy waters and away from the protections of friendly forces. Courageously exposing himself to attack by hostile air and surface units, he established the identity of the aircraft and, by flashing messages, directed our planes safely to the carriers, which had been forced to retire from the battle area, thereby saving a number of our aircraft from destruction. His devotion to duty were in keeping with the highest traditions of the United States Naval Service."

Citation:
"For meritorious service as commanding officer of a destroyer which engaged enemy aircraft during operations in the Solomon Islands area, on the night of February 17, 1943. Commander Bell's ship participated in convoying troops, supplies, and equipment to Guadelcanal and on the above mentioned date assisted in repelling and frustrating an attack on the convoy by Japanes torpedo planes which resulted in a loss of at least five planes. By his courage, perseverance, and determination he brought his ship through on this occasion without damage and contributed materially to the successful accomplishment of the mission of the entire force. His conduc throughout was in keeping with the highest traditions of the United States Naval Service."

Awarded with "V" for Valor.

Awarded with two silver and a golden star (seven campaigns). 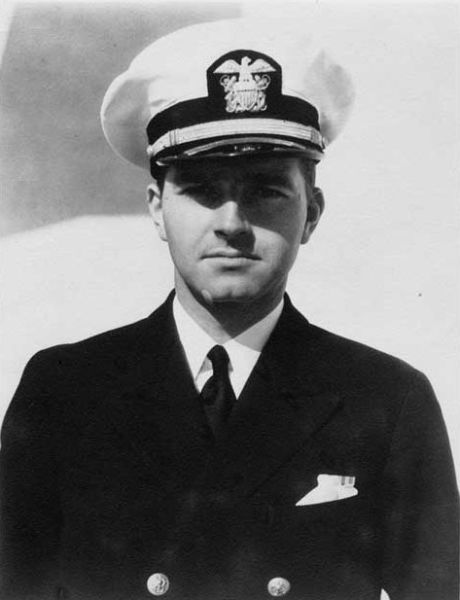