The Deutsches Schutzwall-Ehrenzeichen better know as the Westwall Medal was instituted by Hitler on August 2nd 1939. This medal was instituted to award the more than 600.000 designers, engineers and builders of the Siegfried Line (Westwall) and other fortifications on Germanys Western border. This medal could also be awarded to all the military personnel who were stationed on these fortifications before May 1940. The first awarding of the Westwall Medal was on November 23rd 1939. On this date the first Westwall Medal was given by Hitler personally to Dr. Todt. The first group of workers were on November 24th 1939 awarded with the medal and Dr. Todt was the one who handed these medals out. The Westwall Medal could be awarded until January 31st 1941. From this date onwards it was forbidden to award this medal until Hitler reinstituted it on October 10th 1944 due to the successful Allied landings in Normandy. When on January 31st 1941 the awardings were ceased, there were already 622.064 medals awarded. After the successful Allied landings in Normandy and the following allied advance, a group of a 200.000 engineers and builders of the Organisation Todt were rushed in to the Westwall fortifications to renovate and strengthen it. To keep the moral of this workforce high, the Westwall Medal was reinstituted.

The recipients who were already awarded with the Westwall Medal came in consideration for the Spange zur Deutsches Schutzwall-Ehrenzeichen (Clasp to the Westwall Medal) This Clasp is probably never produced because theres until know not one original Westwall Clasp found. The exact design of this Clasp is also uncertain, according to some statements it should be the same size as the Clasp to the Commemorative Medal October 1st 1938. In the centre of the Clasp should been stamped 1944 and the Clasp should been made out of solid bronze, so it should fit better with the bronze medal.

The Deutsches Schutzwall-Ehrenzeichen has an oval shape, is 40mm high and 33mm wide. The total picture on this medal exists of 3 different motives. The lower motive exists of a dug-in pillbox with 2 gun ports, of which the left gun port is a bit smaller than the right one. The 2 small hills that are placed in a V-shape in front of the pillbox, represent the grass hills in the surrounding area. The complete pillbox motive refers to the Westwall fortification. The centre motive exists of a spade and double-edged sword that are placed in a crossed form. This refers to the fact that the Westwall Medal could be awarded to civilians and military personnel. The upper motive exists of an eagle with spread wings that is clutching a wreath which holds a swastika in its claws. The tips of the eagles wings stretch till the outer edge of the medal. This eagle represent the national symbol of Germany. The total motive is surrounded by a thin raised line. The outer edge of the medal is formed by a wreath of oak leaves. This wreath is formed by 8 oak leaves on each side and these are bounded together at the bottom and top by a ribbon. At the reverse the motive is replaced by the text; FŰR ARBEIT ZUM SCHUTZE DEUTSCHLANDS. This text is just as the motive at the front encircled by a thin raised line and an oak leaf wreath. The first Westwall Medals were made out of solid bronze, the medals that were produced after the reinstitution in 1944 were made out of zinc and finished with a bronze layer. The Westwall Medal was produced by Steinhauer & Luck of Lüdenscheid. (LDO no. 4) The medal is suspending from a 30mm wide ribbon. This ribbon is separated in a 18mm wide sand coloured stripe in the centre, which is flanked by two 4,5mm wide white stripes and accordantly by two 1,5mm wide sand coloured stripes.

The Westwall Medal was awarded in a brown or grey coloured paper packet with the award name stencilled on it in Gothic letters. It was also possible that the medal was awarded in a box. This box exists in multiple colours and with the awarding came a standard award document. The medal was worn on the left breast pocket or in a ribbonbar, however when it was worn in a ribbonbar it was always the last in line of all the other German awards.

The criteria for receiving the award were: 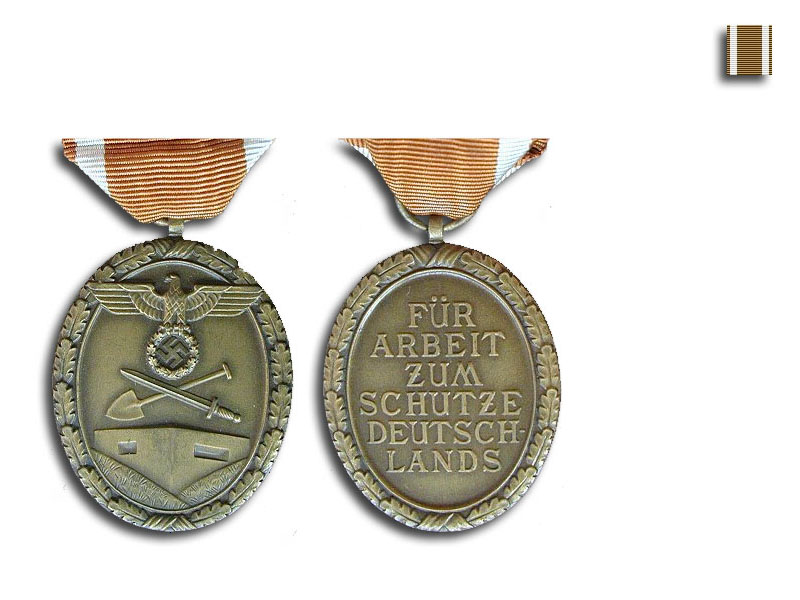