The Krim Shield was struck in sheet metal and treated with a bronzed wash. The shield has a slightly concave shape with a hollow backside. The top of the shield shows the typical Wehrmacht eagle with spread wings, that is clutching a wreath of laurel leaves in its claws. In the centre of this wreath is a mobile swastika placed. The wreath is flanked by the dates 1941 and 1942, with left of the wreath 1941 and right 1942. Underneath the eagle comes the shield design with a rounded point at the bottom. The image on the shield is a scale map of the Russian mainland with underneath the Crimean Peninsula. The six most important places are showed as dots and the main rivers as slits in the landscape. In the middle of the peninsula stands the text KRIM. Because there were multiple producers of this shield, the colour can range from a dark chocolate brown colour to a fine pale bronze. At the backside is a supporting plate mounted with 3 or 4 pins and between these two parts is a piece of cloth placed. The colour of this piece of cloth depends on, in which Army branch the recipient served. This could be Wehrmacht or Kriegsmarine. This piece of cloth is shield shaped and is significant larger, so it could be sewed to the left sleeve of the uniform. The supporting plate with the pins was covered with a piece of red brown coloured paper or a piece of cloth. This was to protect the uniform from the pins. The number of pins can be different by producer, just as how detailed the shield is. This can range from a fine detailed shield to a very poor one. It was for the recipient also possible to buy a (9mm) stickpin of this award. This stickpin could be worn on the civilian tunic.

The Krim Shield was awarded in name of Generalfeldmarschall Erich von Manstein and with the shield came a standard award document. The awarding was also noted in the Soldbuch. The shield was permanently worn on the left sleeve of the uniform and because of this there were multiple examples given to the recipient. It was also possible for the recipient to buy later new shields, this could in the official controlled LDO outlets. When the recipient owned multiple campaign shields, these could be worn underneath each other with 5mm space between them.

The criteria for receiving this shield were: 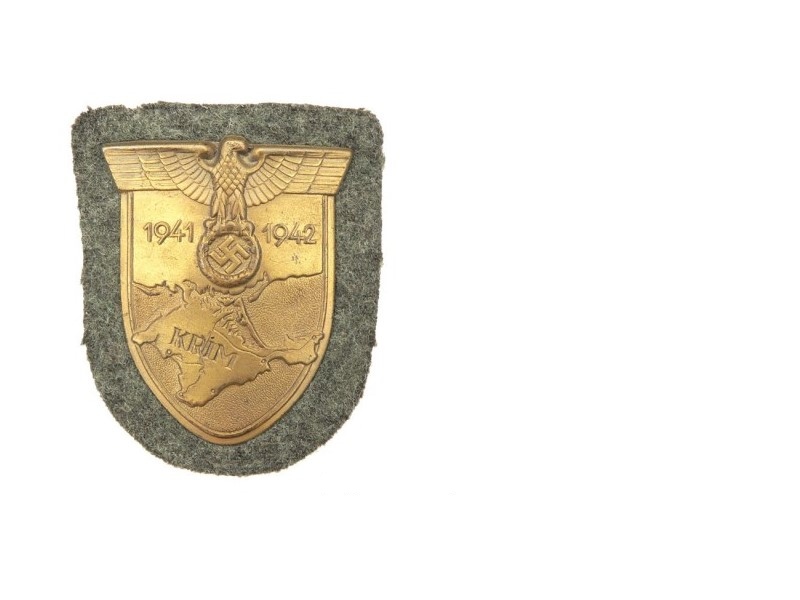