This star was awarded for operational service from September 3rd 1939 (the day of the outbreak of WW 2) to August 15th 1945 (the day hostilities against Japan in the Pacific ceased). A bar was authorized for fighter crews engaged in the Battle of Britain from July 10th to October 31st 1940.
The badge is a six-pointed star with the Royal Cipher GRI VI in the centre surrounded by the inscription: "The 1939-1945 Star" and surmounted by a crown. The reverse is blank. Recipients are eligible for the other campaign stars of Burma, Italy, the France and Germany Star and the Pacific Star. The ribbon is 1.25" wide with three stripes of equal width coloured dark blue, scarlet and light blue which represent the three armed services.

This decoration could be awarded with the "BATTLE OF BRITAIN" clasp. The clasp was awarded to all those that had flown on at least one operational sortie with an accredited Battle of Britain squadron between July 10th - October 31st 1940.

In 2012 it was noted that a new clasp would be produced for affiction on the 39-45 Star, called the "BOMBER COMMAND" clasp. The clasp can be received from 2013 onward by any person who, during the Second World War, has flown as aircrew for at least one operational sortie with a Bomber Command operational unit. 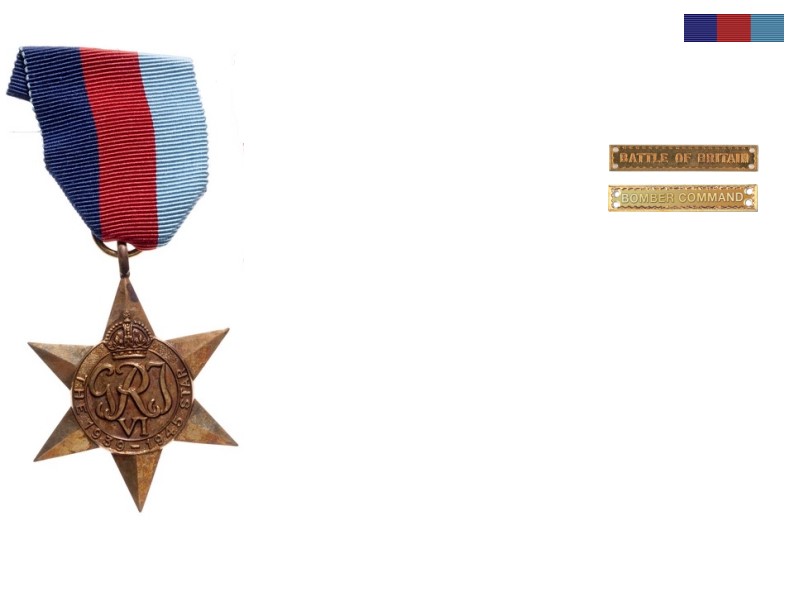