The Bronze Cross was instituted on June 11th 1940. It was to become a special award for military, who behaved courageous or meritious in facing the enemy, in service for the Kingdom of the Netherlands. When civilians or foreign military acted in special interest for the safety of the Netherlands, they could also be rewarded the Bronze Cross.

The decoration could be awarded more then once. The recipient received a gold coloured Arabian number to be worn on the ribbon, that indicated the number of Bronze Crosses the recipient had received ("2", "3", etc.).

The medal is formed in the shape of a four armed cross with a total width of 29 mm. On the obverse there is a crowned "W" inside a circle with Oak Leaves on the left and laurel on the right. On the reverse is shown the same circle, but within it the year "1940" and on the arms of the cross the words "TROUW AAN / KONINGIN / EN / VADERLAND". The medal is taken from the old "Metalen Kruis 1830-1831". The ribbon is orange with a small stripe of Nassau-bleu in the middle.

At first the medal was also awarded to anyone who had received the "Eervolle Vermelding" (Mentioned in Dispatches) if they hadnt received a Bronze Cross before. To indicate this there was a "Kroon voor Eervol Vermelden" (Gold coloured crown) being place don the ribbon of the Bronze Cross. However in 1944 there was instituted a new decoration, the Bronze Lion and all Bronze Crosses that were decorated with the mentioned in dispatches crown were replaced with the Bronze Lion.

The Bronze Cross is received after a Royal Decree that is controlled by the Commissie Dapperheidonderscheidingen van het Ministerie van Defensie (Special Committee of the Ministry of Defence) which advises the Minister of Defence and the Dutch Queen. 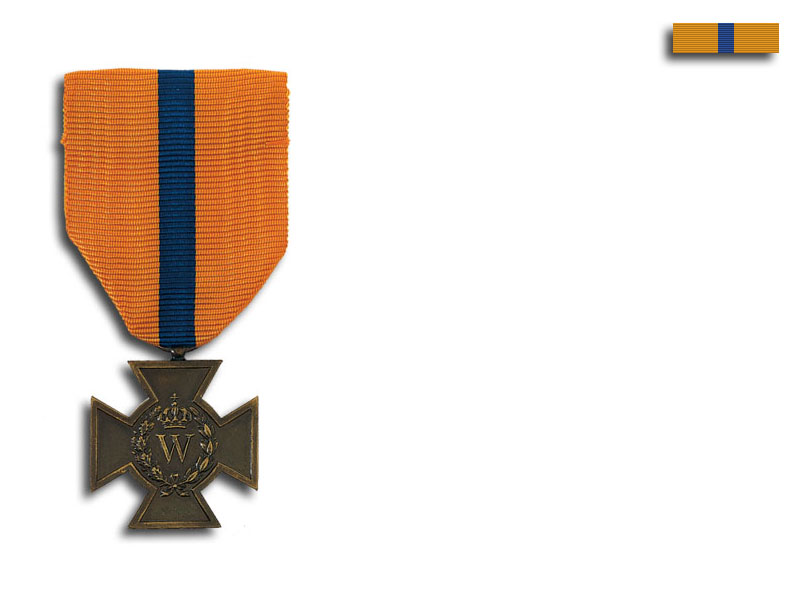