The Distinguished Flying Medal was instituted on 3 June 1918 and was awarded to non-commissioned-officers and men for an act or acts of valour, courage or devotion to duty performed whilst flying in active operations against the enemy in the same conditions as the DFC for officers..
The medal is oval and silver-coloured, 1.375 inches wide and 1.625 inches long. On the obverse is the bareheaded coinage effigy of :

King George V, facing left and the legend : GEORGEIVS V BRITT: OMN: REX ET IND: IMP:
King George VI, facing left and the legend : GEORGEIVS VID: G: BR: OMN: REX F.D: IND: IMP:
On the reverse, within a wreath of laurel, Athena Nike is shown seated on an aeroplane, a hawk rising from her right hand above the words : FOR COURAGE.
The ribbon is 1.25 inches wide, and consists of alternate violet and white stripes (0,0625 inches) leaning 45 degrees to the left. Until 1919, the stripes were horizontal. The medal was engraved with the recipient's service number, rank, initials, surname and unit.

For subsequent acts meriting the DFM, a bar was awarded to be worn on the ribbon of the medal. 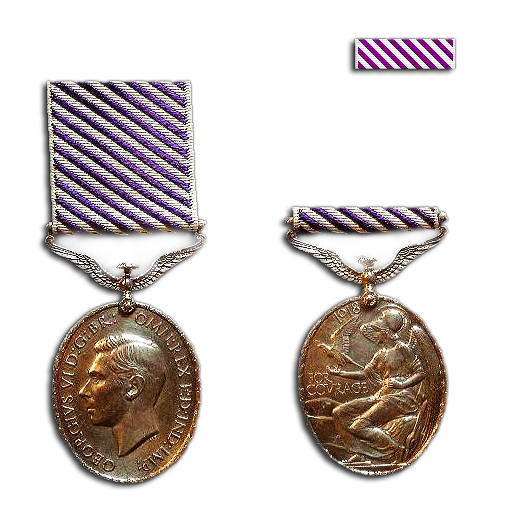