The official criteria were the individual and single act of bravery in the face of the enemy or actions that were above and beyond the normal call of duty. The approximately three million awarded crosses were obtained by German Military, Axis military and civilian uniformed organisations.

The cross measures 44 mm in diameter and hangs from a ribbon in the colours black white and red. The wide red band in the middle is being flanked by two equal white bands that both again are being flanked by a black band. During the whole war the production was retained with a high quality. On the front side one can find a Swastika and the year 1939, while the obverse contains the year 1813 on the lower arm.

Almost all World War Two crosses were made out of three parts, the Iron core and a silver rim on the front and backside. The two silver rims were welded together, holding the iron core. The core was produced from iron and was blackened. This core made the Iron Cross to be magnetized. Some examples are not magnetized because they were produced with brass or cupper. This version was especially welcome with members of the Kriegmarine. This core lasted longer in the exposure of salty sea water. The rim was supposed to be made from silver, but more common was the use of German Silver, a less expensive alloy of cupper, zinc and nickel. At the top a ring was welded to hold the loop for the ribbon. On the loop one can often find the manufacturers name although it is not uncommon that no name is placed. Therefore the absence of the manufacturers name is not a criterion to classify the cross as original or not.

The Iron Cross could be received in two different ways. The most exclusive way was in a leather box. More common was the bleu coloured envelop with in gothic letters the words Eisernes Kreuz 2.Klasse. The presentation was accompanied with a standard document. The receiving was also to be written down in the recipients Soldbuchor Wehrpass. The document normally didnt contain the reason for obtaining the Cross, although in some occasions it was written down on the backside of the document.

It was not usual to wear the decoration it self. In stead a ribbon was worn on the left breast of hanging from the second button hole of the tunic in the way of the former Prussian Army.

In 1957 a special version of the cross was produced. On this the Swastika was replaced with an oak leaf. The way military actions of the Second World War could be honoured without the use of the forbidden Nazi-symbols. Most veterans however choose to wear the decoration as a ribbon only. Most 1957 versions are of a lesser quality than wartime examples. 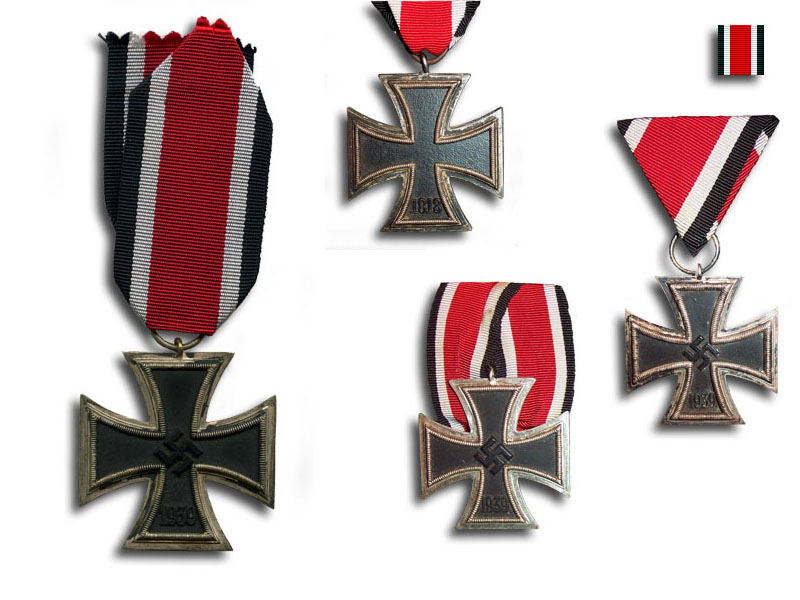